I went to a stereo install shop and asked them to install wires for a JL Audio Stealthbox that I bought into my 2012 JSW.

They installed the wires and the first thing that happened when I went to pick my car up from the parking lot: my battery was dead. They were closed so I literally had to flag someone down and ask for jumper cables and then started my car.

When I drove away I noticed I didn't have any chimes.

I went to autozone and bought my own jumper cables (since every time I started the car the battery seemed like it was too low to start) and a battery charger.

I left my battery charged over night and it's still exhibiting the same issue (hard to start).

I took my car back to the install place so they could "look for the wire that they may have unplugged down by the kick panel) [my first indication that they didn't understand my car even though I specifically asked about their modern VW install experience beforehand].

The manager pulled my car into the bay and came in and told me that it was starting hard. I explained that it has been an issue ever since they did the work on my car and that his team had left me stranded in their parking lot when it was nighttime and that I was keeping things polite and professional but that he should know that I'm actually livid about the job so far.

I explained that I cleared a bunch of fault codes (traction control, steering, ABS, and radio) and showed him the issues that came up via VCDS. He claimed that his techs never had the radio out, that they only "spliced" the line output converter into my harness down by the kick panel speaker (to which I replied that's what I specifically asked them not to do and he told me they wouldn't be doing), and that they've worked on "better and more expensive cars than mine" and never had any issues.

I tried to remain calm and explained that I don't appreciate him responding to my concerns with insulting my vehicle. That it's not about price but rather complexity of the VW system and how the radio, the dash, the steering, and the entire computer is all tied in together.

He started to argue that my car's dash was "lit up like a christmas tree" when they pulled it in the first day and then threatened that if I didn't like their work he'd just go pull everything out.

I responded that I didn't really care what they do, did, or didn't do, but that if the car doesn't leave in the same condition that I brought it in we'd have an issue. I also informed him that I have a clean bill of health from the dealership dated from last weekend after they updated my bluetooth software in the car--so good luck trying to argue that my car had a bunch of problems on the dash when they started working on it (what I didn't tell him is that I also have a before/after readout from VCDS indicating the lack of fault codes before the work and the presence of them afterwards).

So of course the techs can't figure out where the speaker plug is (because there isn't one that I know of) and now the manager is asking me to come in next week so his "VW tech" can have a crack at it.

So now I'm thinking that I can either have the guy who should have been doing the job in the first place (assuming he actually does know how to work on modern VW's electrical) or take it to the dealer and have them repair the issues and send the shop the bill.


Is there some setting in VCDS that I can check to see if the turn indicators chime somehow turned off? The seatbelt warning chime is set to On but still doesn't make any noise.

Could this all just be one huge coincidence? Is it conceivable that them splicing something into my speaker wires down by the kick panel actually did damage to anything? Or when they disconnected the battery to run the main power? Or, as the manager claimed, they didn't even disconnect my battery (arguing that they only loosened the nut to put the main power lead) which seems like working on a live system while running main power, ground, and splicing in a component into the harness is a) incredibly stupid and b) potentially damaging.

It's highly possible they fried something in the CECM.

I don't think it's all coincidental.
S

The chime issue happens to me just about every time my battery runs low. After charging the battery up, pull the power cable off for a min then put it back on. It should reset pretty much everything and your chime will start working again. I have yet to find a way to fix it via VCDS. Just remember, when you pull the battery you will get some warning lights on the cluster, just drive for a bit and they should clear.

My powered sub was ran off the REAR speaker wires and there has been no problem whatsoever. Still working great after almost two years.

Those guys just don't know what they are doing and the manager doesn't understand much about the problem either; just trying to cover his ass.

Thank you for the responses.
Turns out they did not wrap a bare wire and it was shorting out in the kick panel. 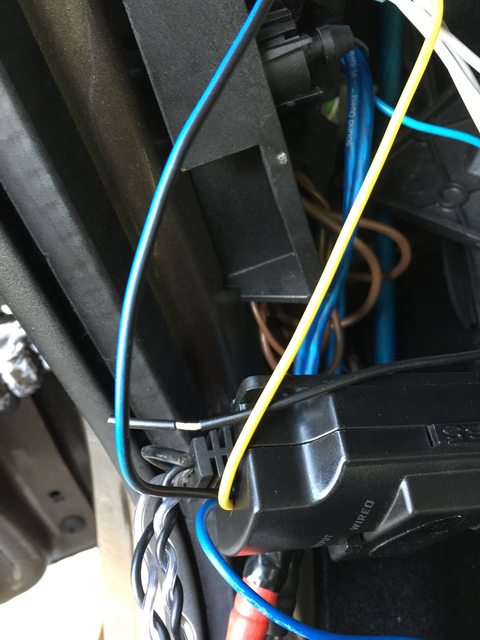 I had to buy a new battery because the draw on the battery over the weekend damaged it.

I hope there was no internal damage to anything else but everything is now working correctly and no more faults so only time will tell I suppose. Would I know if the CECM was fried in an obvious manner or could there be problems lurking?

Personal experience, it's better to do stereo work yourself or with a big box place that has the insurance to cover idiot workers. I used to work at Best Buy and I remember my buddy who still does car audio telling me horror stories. A customer installed XM antenna through the windshield with a drill, employee burned out 2 cars ECU's before being transferred and the insurance paid out over 10k between the two, etc.

Have an advance auto or wherever check the new battery to verify there isn't a draw on your battery when your car is off to avoid further starting issues. Those guys certainly did a wacky install though...

If you are still skeptical, stop at a best buy and ask if they could take a quick look. Usually the good ones will pick an install apart fast and can see what's wrong.
Last edited: Dec 8, 2014

Thanks for the response. I should have pointed out that I simply took it in to the dealer and explained the situation and they sorted it out within a few minutes. I was mainly curious if there was anything more that I should be on the lookout for that might show itself over time.

Rainman might be a genius at Blackjack, but I would never have him work on my car. The shop owes you a battery and payment for fixing their screw up. Will you see it? Probably not. The manager will just deny, deny, deny.............

I'm not sure what the black wire goes to. It looks like it's a ground for speakers that need it:

MANY years ago, I had some speakers replaced, and when I saw what a hack-job it was, I realized that I couldn't trust installers with ... well, anything, apparently. Speakers should be almost plug-and-play, and you don't need to do lots of messy wiring if you have adapter plugs for the existing connectors. But to do it "right" takes more time, which they won't do because of money, and splicing and hacking up existing connectors does work...

Unfortunately, VW makes it hard to replace speakers in this car. I had to remove the door panel, etc., and they rivet the existing speaker in, so it requires some modification and a new 1" spacer.... But at least I know what I did to the car and still used adapter plugs to keep the wiring as neat and clean as possible.
Last edited: Dec 14, 2014
You must log in or register to reply here.
Share:
Facebook Twitter Reddit Pinterest Tumblr WhatsApp Email Link
Top