So I've been out of the TDI game for a long time now, but with my new long commute I need back in.

How swap friendly are the 3.0L TDIs? I know the immobilizer will need to be disabled to go in an older vehicle. The chassis in question I'm thinking about is this D2 S8 sedan I have taking up space. I've got a 6-speed conversion kit coming for it so that's taken care of and I already have a TDI geared 01E in the shed. Is this a viable option? Sorry if this has been covered before.

Should be a relatively straightforward swap. The A8 came with both the 01E and 3.0 V6 TDI (D3 and later though). The D2 only had a 2.5 VP44 V6 (and 3.3 V8) TDI, but physically mounting the 3.0 should not be too involved and may even drop on the chassis mounts or have bosses on the block to have D2 engine mount brackets bolt up. The main challenge will be getting the newer 3.0 ECU to talk with the instrument cluster and the rest of the car. Again, nothing that is without precedent as long as you have complete wiring diagrams from your S8 donor and both D2 and D3 TDIs.

This thread belongs more to the TDI Conversions section. Moving there.
V

I’m not doing a 3L swap into a D2 rather in my 01.5 A4 Avant, but from working on D2’s I’ll shed help. First off, what generation V6 are you thinking of swapping?

Engine mounting-- The 2.5L and 3L V6 diesels have different mount patterns on the block thus the brackets cannot do not fit on a later V6 TDI. Additionally it looks like D3 V6 TDI motor mount brackets might not work in a D2 chassis due to how the pitch or angle is of the motor mount and subframe.

Wiring-- Depending on what motor you want to swap, we can dive into this. Given the similarities to a D2 and B5 regarding wiring, it’s highly possible to run a newer motor (B8 Q5 TDI, C7 A6 TDI, etc) on an older common rail harness, such as one from a B7 3L TDI. It’s not a plug and play affair and will require some harness mods.

For the heck of it here’s my B5 project. Got It mounted, just doing the wiring phase now 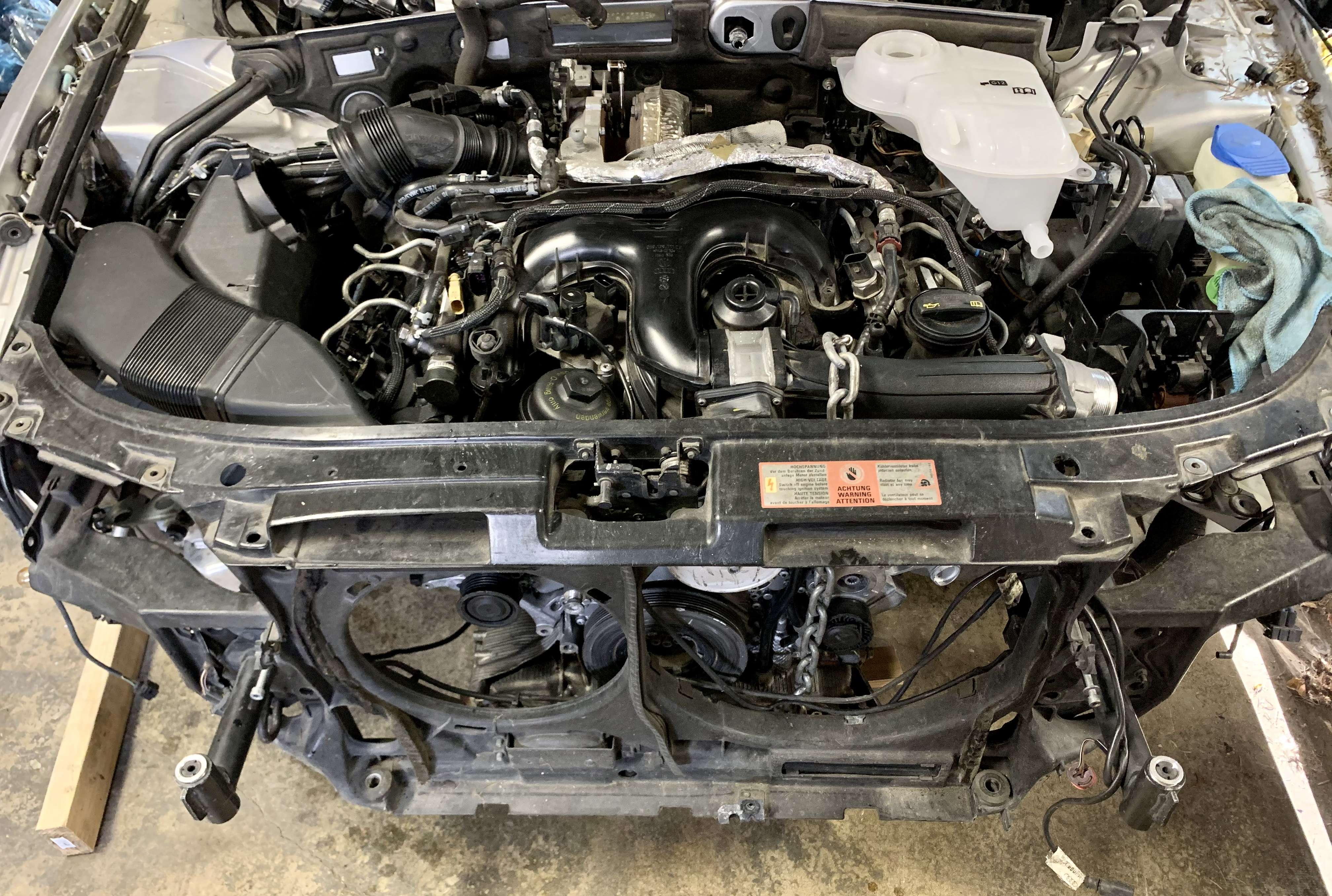 I'm eager to read any info you have on the install and wiring for B5 CR swap, @V70R ! I've been drooling over the 3.0's for a while now and just assumed you had to go B7 or newer to get it all to work

I'm still searching for info on the vw engine bolt pattern on the 3.0/4.2. Are they they same as the 4 cyl tdi motors?

I've been looking at a duramax 6.6 for an eventual replacement motor for my current 4.2 I6 inboard diesel motor for some time but I think finding a tune for a tdi 4.2 v8 tdi would be easier. My intentions are ditching the turbos and installing a whipple charger. Aiming for power band starting around 2500 rpms and max 3600 rpms @275 to 300 hp.

Engine mounting-- The 2.5L and 3L V6 diesels have different mount patterns on the block thus the brackets cannot do not fit on a later V6 TDI. Additionally it looks like D3 V6 TDI motor mount brackets might not work in a D2 chassis due to how the pitch or angle is of the motor mount and subframe.

Wiring-- Depending on what motor you want to swap, we can dive into this. Given the similarities to a D2 and B5 regarding wiring, it’s highly possible to run a newer motor (B8 Q5 TDI, C7 A6 TDI, etc) on an older common rail harness, such as one from a B7 3L TDI. It’s not a plug and play affair and will require some harness mods.

For the heck of it here’s my B5 project. Got It mounted, just doing the wiring phase now

Koehn said:
I'm eager to read any info you have on the install and wiring for B5 CR swap, @V70R ! I've been drooling over the 3.0's for a while now and just assumed you had to go B7 or newer to get it all to work
Click to expand...

Definitely! Theres a few B5 A4’s in Poland that have done this conversion, and most seem to rock a B7 harness modified to accept the later 3L motors in their conversion.

The 3.0 is a freaking awesome motor. A smidge more complex, but it should be a kickass car to drive in a car the size of a B5 or B6 Audi.


Mozambiquer said:
Now this!!! Is this the B5 Audi, or Passat?
Click to expand...

It’s in my late 2001 A4 Avant, a car that I haven’t driven since October 2016 haha. I’ll get a thread going here soon…will be cool to share some of the swap progress

Pfft, lucky! we have to wait an additional 10 years before having the chance to buy that. The amount of A6 Avants with manual gearboxes and cloth sport seats over there is amazing…so so jealous!
V

I'm actually looking to get like an 07 or 08 A5 3.0TDI 6-speed crashed car as a donor for other later things for my S5. My understanding is that the earlier 3.0TDI are equipped with the more dependable CP3s vs the problematic CP4.2s. If a B7 harness is easier to make work great. Bigger CP3 isn't really hard to get so not worried there.

I just did a non broken drivetrain swap on this S8 a year ago, so I know about there unique mount situation. I'm not opposed to doing a tubular subframe to use like standard B5 mounts. 500 a mount is ridiculous. The biggest concern I have is turbo routing. Guess I should look at the B7 vs B8/D4?

What about clutches and flywheel? Will the 2.7t stuff work?

I know an S8 seems like a weird pick, but I have it and it doesn't ride or look bad. I just need something more economical now. I figure it's already 4:11, has ample room and has big tires to help cut rpm down. Plus 100+ miles a day luxury is nice.
V

An early B8 A5 V6 TDI wold be a solid transplant contender for a D2. The CAPA V6 from B8’s is pretty similar to an ASB 3.0 V6 TDI found in the B7, so the wiring portion would be pretty simple.

After comparing motor mounts, I think it would be fairly easy to adapt B5 mounts to a D2 subframe. You could have brackets made probably cheaper than an entire subframe too.

Turbo routing shouldn’t be too bad. I wouldn’t be surprised if you can use most of the B8 A5 TDI boost tubes in a D2 chassis; the B8 A5 has a smaller front mount intercooler that with some brackets welded to the D2 core support would fit like an OE setup.

V6 TDI’s have a 10-bolt flywheel, so the 2.7T stuff won’t work. I’ll be using a B7/C6 V6 TDI flywheel with a Sachs SRE clutch. TTV Racing might make a heavier SMF option for these motors, but I don’t want a bunch of increased NVH.

D2 S8’s are awesome cars. They‘re one Of my fav highway cars from this era of German sport sedans, and should be pretty awesome with a V6 TDI under the hood

edit- here’s a good thread about B8 A5 TDI intercoolers and upgrades. Pics are still working too so you can see where the boost hoses are in proximity to everything up front. https://www.a5oc.com/threads/3-0tdi-intercooler-upgrade.149561/

Not that you'd sacrifice your S8 to do this, but since you mentioned a desire to save on fuel costs for your commute...

A member in Finland modified a D2 A8 for the purpose of hypermiling. He swapped the original engine with one off a 3L Lupo (1.2L 3-pot TDI), made it FWD, inspired from another existing, running project ( http://www.wardtro.de/html/3l_audi.html ) -- with future plans to make it an AWD hybrid. As of his last update in 2016, he got a best of 66 US MPG (!).

I'm sure something like a properly built ALH with like a GTD1752VRK on it could get like 65ish mpgs in this, but at the speed of a snail.

3.0L is 10 bolt is it the same as the old Audi V8s? I know they brought it back for the C5 RS6 and I believe the R8 and W12 are the same. If that is the case clutch masters has options. Personally I love my Dodge with twins so I'm thinking about going twin 8.5s on like a 22lb steel flywheel.

@V70 what did you or are you doing for the fuel tank/system?

On the Fabrication of parts I don't mind doing it and have welders and implements of destruction. If I'm swapping the engine removing as much S8 unique parts as possible would be nice.

What to do about the cluster can I use the stock gas one or do I need to get a European TDI one?
V

I think 45mpg highway is an obtainable number for a 3L with a decent exhaust and other supporting mods. First off, I didn’t realize a D2 S8 was so heavy! Curb weight for a D2 S8 is almost the same as my TDI donor, a 2016 A6; they’re both tipping in right around 4,100lbs.

Yep! Same 10 bolt pattern. Only thing I’ve noticed is the crank sensor tooth spacing for the TDI is different when compared to 078-079 RS V8 motors. I’ll get some pics today, but I am not sure if a B7 RS4 flywheel would work. I’d say contact a company like TTV Racing to get the specifics whether there is a difference. They also do custom stuff like twin disk setups and have some of the best flywheel machining I’ve seen.

Fuel stuff- if I can get a euro diesel tank sent over, I’ll rock it, but at this point no one is interested in sending one across the pond. The plan is to modify the filler neck to accept a diesel handle, use a set of B5 in-tank pumps and most likely a Bosch 7.3 Super Duty pump in-line where the fuel filter location is.

I’d say rock the stock S8 one for now, and down the road you can do a diesel D2 A8 cluster if ya want...especially if your TFT display in the center is in great shape

Dropping the Tiptronic saves like 100lbs. I'm just not sure what the weight difference between the existing V8 engine and related stuff, and the same for the 3.0TDI is.

The D2 S8 does have a few advantages over the B5 weight unfortunately isn't one. Room anywhere up front is available for extras like intercooler, oil cooler, transmission cooler, etc. 6-speed conversion is actually possible with all factory stuff if you look right. They are also stock 4.11:1 so that opens up transmission options. They also run 26.5" tires but 27s fit fine.

What I'm thinking would be my best route of execution is just get a B7/ early B8 3.0TDI engine, harness, and ECU. If possible get it from a manual car to aid in ease.
You must log in or register to reply here.
Share:
Facebook Twitter Reddit Pinterest Tumblr WhatsApp Email Link
Top