Well I did it.

I got all the stuff in last Monday and I did the transformation this afternoon. It took about 4 hours from driving into the shop to driving out of the shop. I took a couple pictures along the way and hopefully some pictures to hope show why the new spindles are needed.

The used brakes and spindles from VWvortex.com (there are two sets of these): 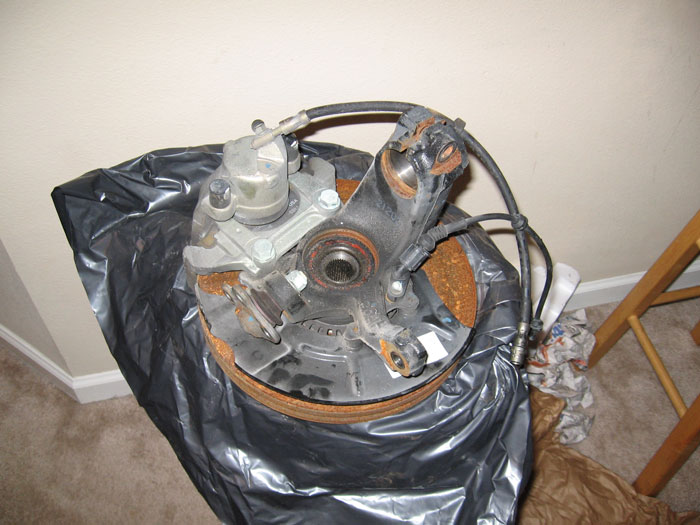 What I started with (driver's side): 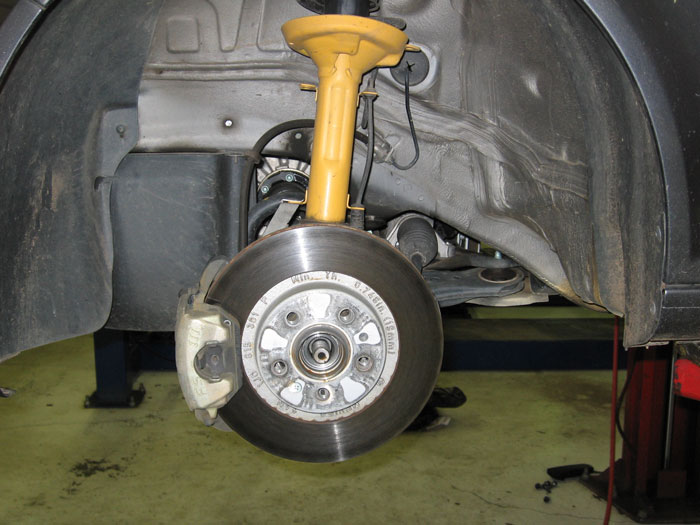 What I ended with: 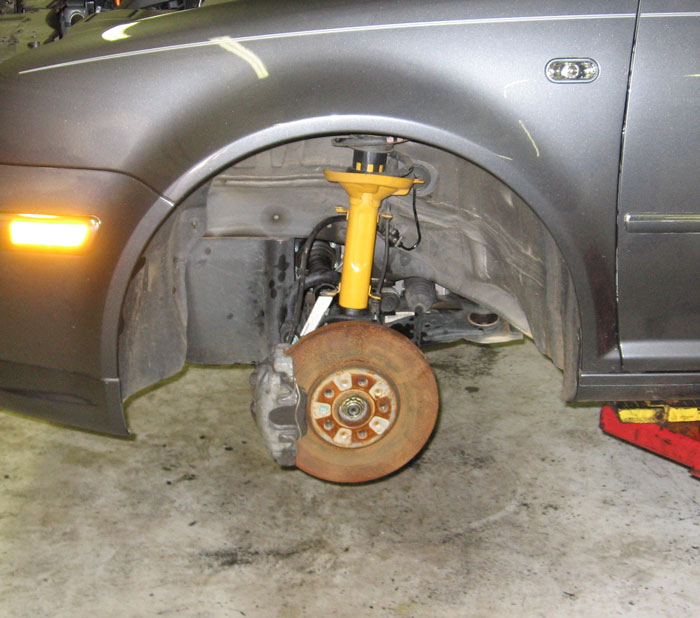 The reason why you MUST change the spindles if you want to upgrade our brakes: 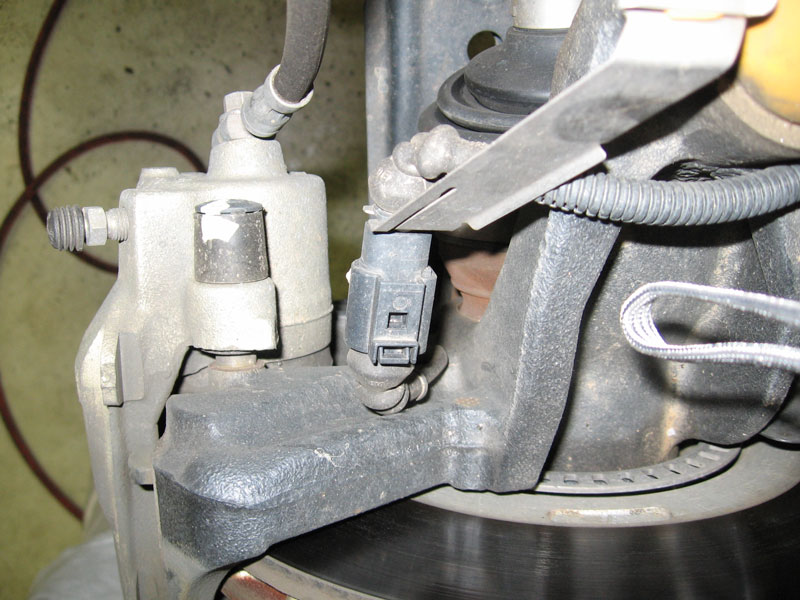 
Some steps along the way: 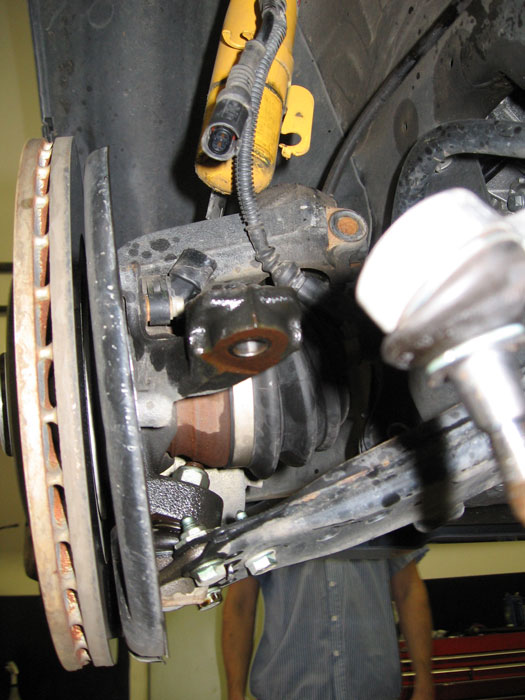 Here you can see that the steering control arm out of focus in the very foreground on the right of this picture. That is the first step (after disconnecting all electrical connections and brake lines, suprisingly little brake fluid came out while disconnecting the brake line), disconnect the control arm. You can kind of see that it has a cone shape to it and it just has a nut on the bottom and is pressed into it's seat which you can see in the direct middle on this picture (it's looks all wet).

You can also see the (yellow) strut in the top of the picture. That is the next step, remove strut from spindle. Not very hard to do if your car is new! If it's old you'll either have to have the VW specific spreader tool or just bang on it A LOT with a rubber mallet (go for option number one if you've never changed your struts). My struts have only been on the car for about 6,000 miles, so they practically fell out.

The next step is to remove the three small bolts from the ball joint (which you can see in the middle of the picture as well). 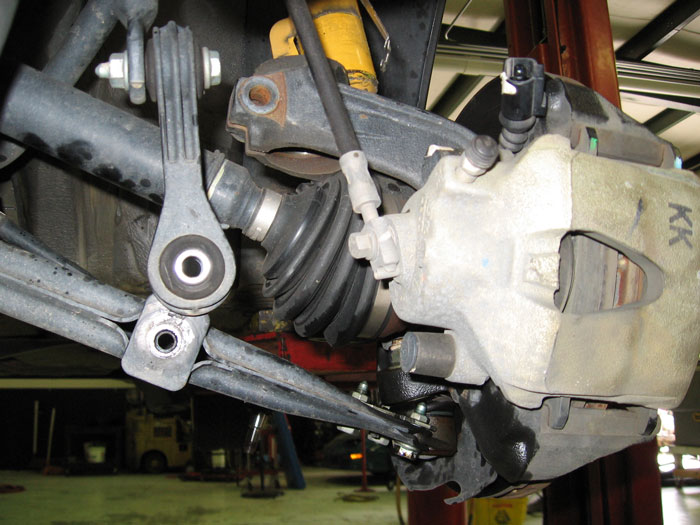 Here's a picture from the front side of the wheel well look back. You can see that I disconnected the sway bar link, it gives you a little more room to work with if you do that.

You can also see the black boots around the two allen screws that mount the caliper to the carrier. This will be the next step, removing the caliper and then the rotor. The rotor is held on by one tiny little screw because when you have your wheels on the rotor is kept in place by your five lug bolts. The tiny little screw was absolutely mutilated on my brakes which only have 15,000 miles. I'll take a picture of it just to scare ya'll.

But really it only holds the rotor on while you have your wheels off, it's not under high stress usually, but I think VW could have had a better way to mount the rotor to the wheel flange.

Anyhow, the caliper and rotor come off really, really easy.
The driveshaft, however, does not. You MUST have a presser in order to do this. I don't think there is any other way.
Picture of a presser in action: 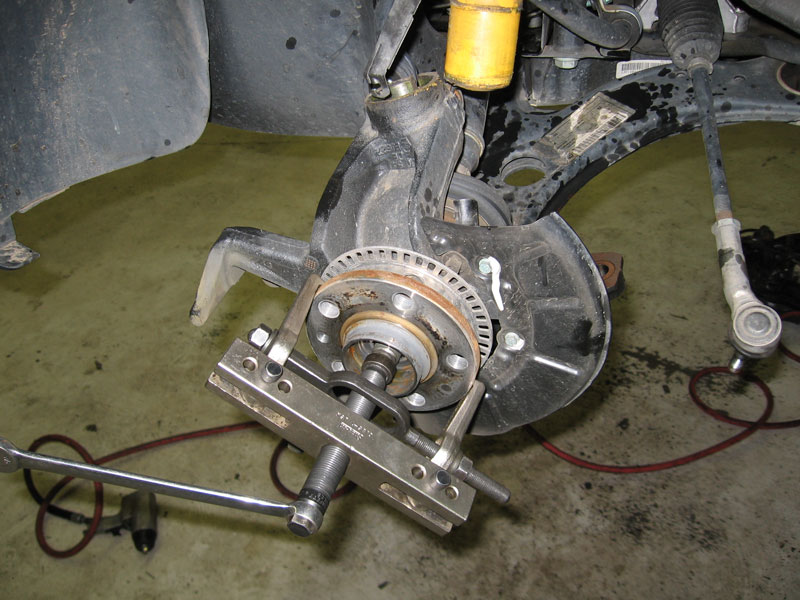 You can see that the rotor and caliper have been removed and you can see the carrier hanging off to the left there. What you can't see is me behind the camera with one special finger up for the spindles with their cast carriers.

So this is what you get after getting the driveshaft out of the bearing: 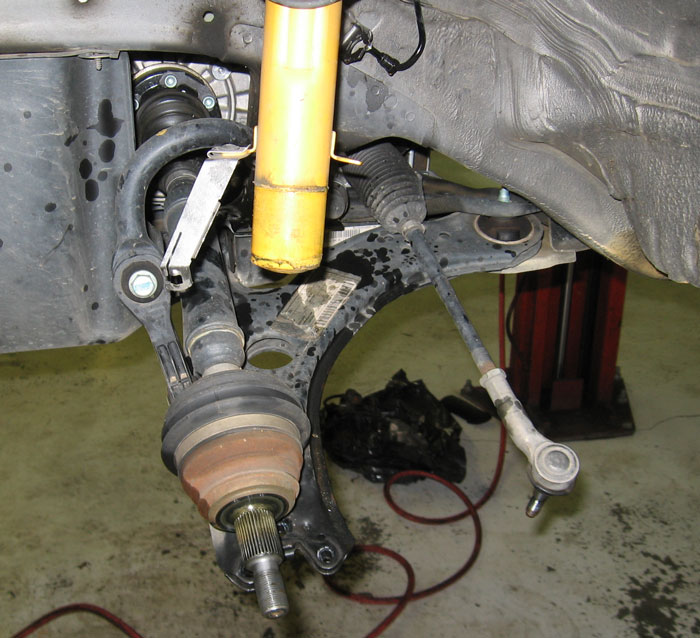 Putting the new spindles back in is just a matter of tracking the steps back, the hardest part is that on the passenger's side you have to get the driveshaft, ball joint, and strut all lined up correctly and then push them all in at the same time. But it takes about the same amount of effort as disassembly.

So that's that. Now I have to get my rotors turned because it was slightly more than surface rust and I have to bleed my brakes again because my pedal is very slightly soft. I also have to get an alignment, but these things are easy compared to the job itself. And now, I can upgrade to whatever I like and it won't be hard at all. Upgrading from here just requires new rotors, calipers (if you want new calipers), and caliper carriers. And... I won't have to disassemble the ENTIRE thing. I'm very pleased with how well it went. Any questions? comments? 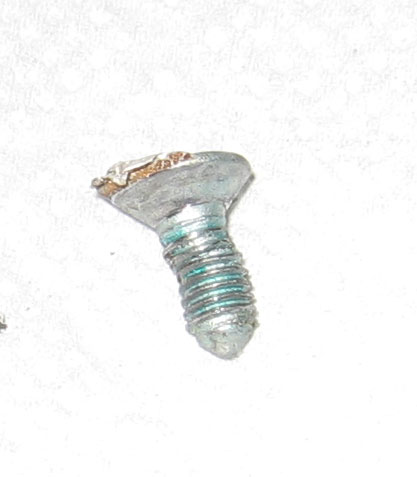 Calipers:
TDI on the left, 1.8T caliper that has been sprayed black on the right: 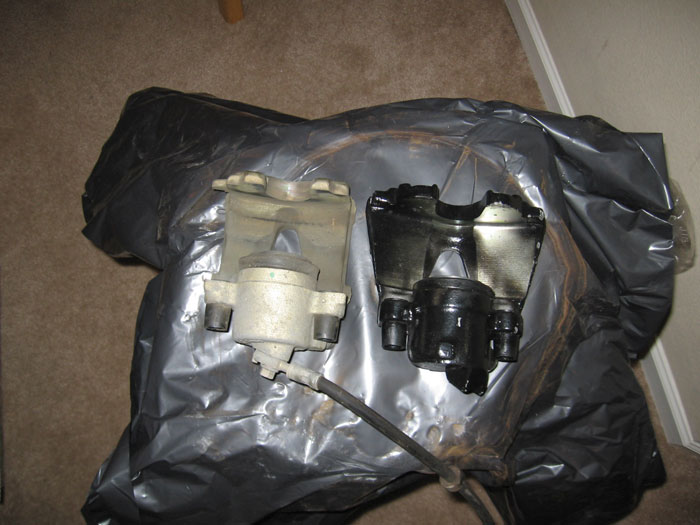 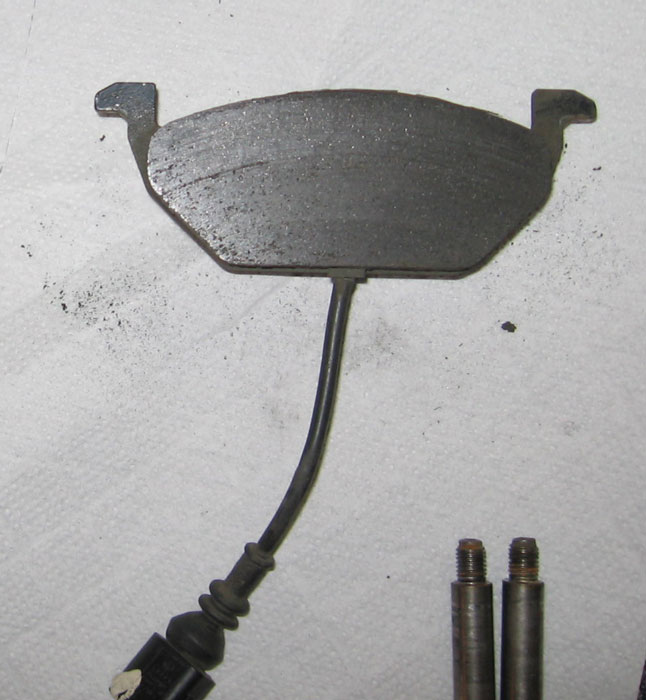 The screws that hold the caliper on the carrier are in the lower right portion of the picture.
R

good write up & pictures...!!!
i'm gettin mine done by ef1motorsports.com for mere lunch money of $130 that includes bleeding, alignment and the install itself.

i can not say enough for Fabrizio for his job well done (well...in progress as we speak) and his reasonable price.

So this is what you get after getting the driveshaft out of the bearing:
Click to expand...

Not trying to nit pick but it's technically out of the Wheel Hub, which holds the bearings inside.

Don't forget to bleed the clutch and ABS module for good measure!

why do you need to bleed the clutch for???
are they not a separate system???

why do you need to bleed the clutch for???
are they not a separate system???

No, the hydraulic clutch uses brake fluid to operate...

So this is what you get after getting the driveshaft out of the bearing:
Click to expand...

Not trying to nit pick but it's technically out of the Wheel Hub, which holds the bearings inside.
Click to expand...

I was suprised when I first did this write-up that I got NO replies, I guess nobody wanted to do a brake upgrade then..

So how much should we be looking to spend for the parts? Just a rough ball park price will do, as I realize there are lots of variations

I will be upgrading my brakes to 05 GLI brakes in the next month. Can't wait to get thoughs on.
A

jnecr: Are your rotors vented on the center?

When I changed my rotors it was very difficult to find vented on the center...

I ended up with this setup:

Artur, are those Koni Specials (aka Reds) in the picture?
R

So how much should we be looking to spend for the parts? Just a rough ball park price will do, as I realize there are lots of variations
Click to expand...

just look for used stuff from vwvortex...
i got my setup for $100 including the 1.8T front suspension just because the guy that was selling couldn't get it off the hub housing.

Artur, are those Koni Specials (aka Reds) in the picture?
Click to expand...

Yes. I was gonna install the Sports (yellow) but they were to hard! These ones are also good for performance and are still very confortable.

My stock ones had 220k kms so I had to change to something...

You should really consider changing the rears as well. The 312/256 Front and Rear combo is just excellent.

You should really consider changing the rears as well. The 312/256 Front and Rear combo is just excellent.

Yeah.. I want to, but I've been putting too much money into it already. And I don't have access to the shop that I once had access to. So it makes it harder now.

Sooner or later though.. I'll do the rears as well. Since they do look a bit absurd in those big 18" wheels.

We should be so lucky.. I don't know why we didn't get them from the start.

jnecr: Are your rotors vented on the center?

When I changed my rotors it was very difficult to find vented on the center...

I ended up with this setup:

Do some VWs come with solid rotors in the front?!

I think that's kind of scary if they do.
T

Anyone doing the brake mod needs to keep in mind that you will need to move up to 16-inch wheels. IIRC, the Wolfsburg Edition wheels will not fit, but the others will.

Thanks. The Red's I've tested were quite nice.

VR6 brakes should fit over the vast majority of 15 inch wheels. They work for RallyVW and I don't recall talking to anyone who has done the same swap who has not been able to run 15s.

If you move up to the 337 or TT brakes however... bigger wheels are a must. For those I have been told that a few 16s will work but mostly 17s are in order.

Yeah, the 288mm brakes will fit with most any 15" wheel. They fit my Montereys (I tried just before I sold them). The 312mm brakes, however, will need to go to most 17" wheels. I don't think the Wolfsburg edition BBS wheel will fit over them. This is probably what Lito is referring to.

312mm will fit inside the NB stock 6-spoke (Monte Carlo?) 16" wheels, but not the Rave 5-spoke 16's. oldpoopie has the Rave and 312mm, but he had to install a spacer between the wheel and the brake rotor to get enough clearance.
A

I think the normal 280mm are not vented on the cube too...

I'm not sure what you mean by "on the cube." Could you clarify that?

Nevermind, I see what you mean... The hub of the brakes is vented, I see that in your pics. No, I've actually never seen, does that really help to cool the brakes? or is that more for weight reduction?
A

Sorry for my bad english... didnt remember the word hub

They can also be for weight reduction , but I believe that the hub gets also very hot with the braking and using high performance pads will genarate a lot of heat and maybe cause some problems for the hub!
My dad owns a 2003 Audi A4 TDI 130 and it has it also vented on the hub.

Some rotors like TAROX G88 or ATE Power Disks dont have the vent on the rotors...

I would actually like to find two piece light weight rotors for the VR6 sized brakes. That would get rid of the heat/venting issue as well as save some unprung weight.

Huh, that's crazy, what are your stock wheels? I've heard of people having trouble with a few 17" wheels...

I know that two piece rotors are in fact spendy but the weight savings are rather profound. When we spend hundrends to save a pound or two on tires and wheels the brakes are the next great place to cut unsprung weight.
You must log in or register to reply here.
Share:
Facebook Twitter Reddit Pinterest Tumblr WhatsApp Email Link
Top