2015 GSW not coming up to temperature

I have a 2015 GSW TDI, 107,000K miles. For the past several weeks, I've noticed I haven't been reaching full temperature on the dashboard gauge - it's been one tick left of center. Suspecting a possible thermostat issue, but, nothing else seemed to be the matter. We got some really cold weather here this week, and the gauge now has been 2-3 ticks left of center even after 20-30 minutes of freeway driving. Clearly not normal, and seems like i'm not getting normal heat output in the car too. Ran a scan in VCDS, and nothing obvious shows up (happy to post the results if helpful).

Failing thermostat? I'm having a hard time finding any sort of instruction on thermostat replacement - looking at a picture of the part, it seems like a pretty major job. I assume this would NOT be covered under the TDI emissions warranty? Any help or thoughts appreciated!

I'll take a look next time I go out. Not sure I've noticed an oil temp option in the MFD.
M

Just checked, I do not have an oil temperature option in the MFD. I don’t see any way to turn that on through the settings either. Is this something I can enable with VCDS?

My 2015 GSW TDI S has this display option and it didn't require any fiddling with VCDS. It takes some horizontal and vertical scrolling through the various displays using the steering wheel buttons to find it, but it should be there (it's in the Driving Data group that contains range to empty, mpg since start, and current mpg). My car's oil temp typically runs 200-220F once the car is up to operating temperature. 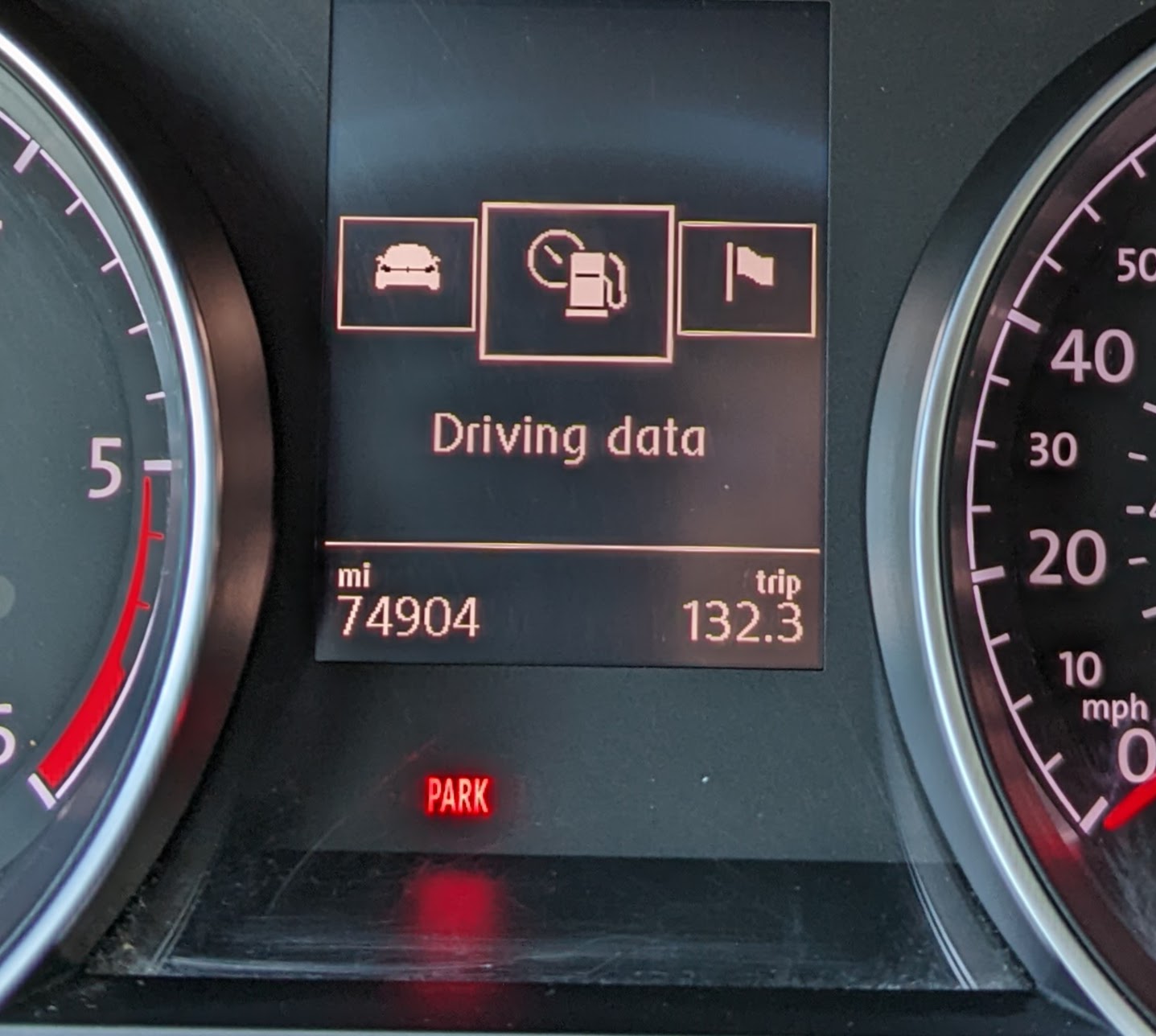 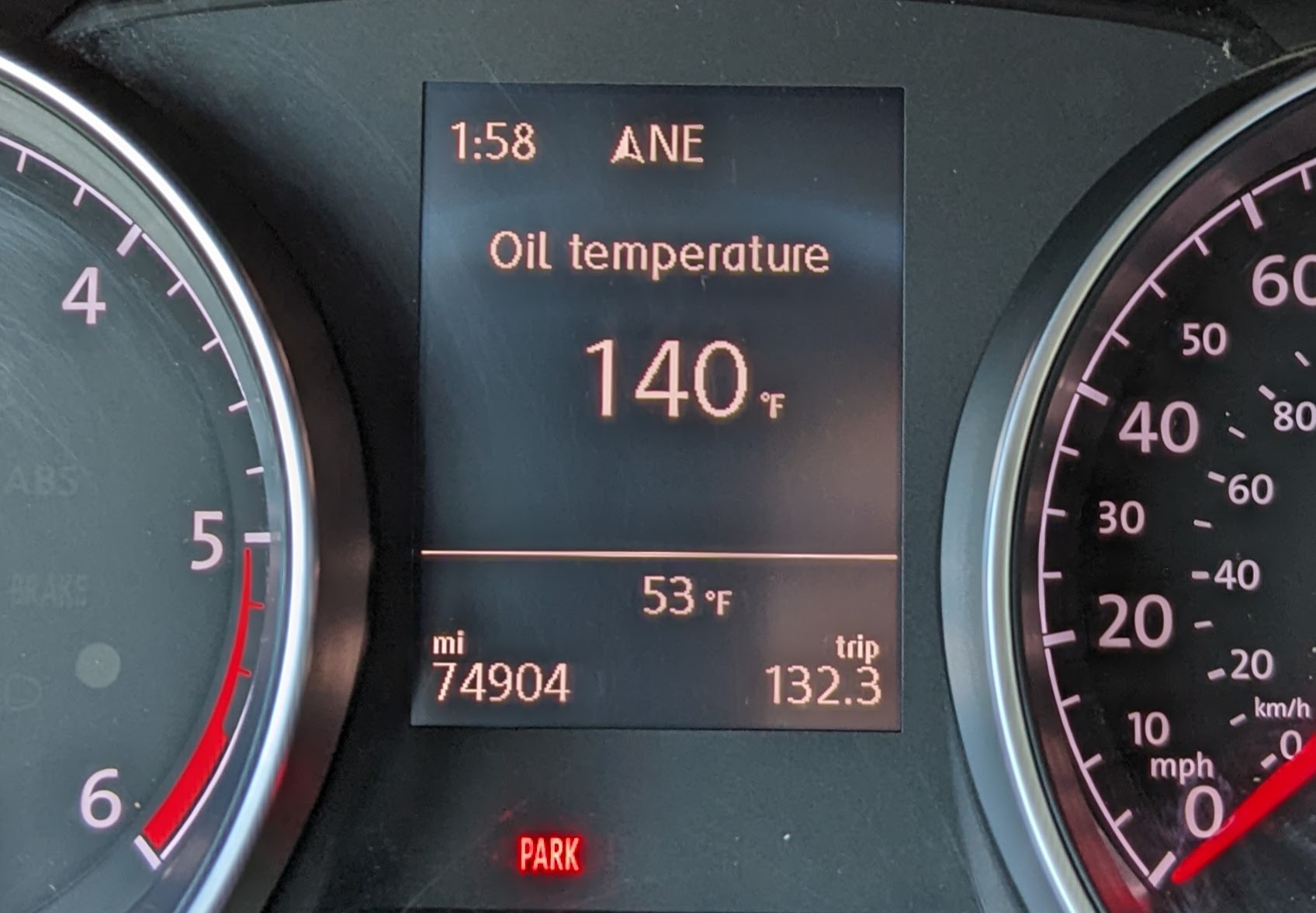 Do these throw a code if the thermostat is failing? With it being cold, it's sadly normal for our tdis to run a bit colder. Have you blocked off your rad grill
If it was your thermostat you'd have heat when parked, but when your moving you wouldn't.
M

I've been through all the options in the MFD - no oil temp. I'll check it with VCDS after a long drive later today. Mine's a 2015 TDI SEL - not sure if that made any difference?

And I've had the car through plenty of winters where we've been sub-zero temperatures - and not had any issues. But now it's not coming to temp even in 32 degree weather. I'll pay closer attention to if it changes when I idle for a while.
R

The oil temp readout is a distraction from your issue, but to get it to display in the MFD display options menu, I believe the coding change required is: Instruments-17 > long coding > byte 10 > activate bit 1.

Now for your actual problem, there are a couple of areas to investigate. VW coolant temp gauges are typically "smoothed" right around the normal temp range, i.e. a good bit of temperature variation in this normal operating range is NOT indicated on the gauge; it instead remains rock steady at 12 o'clock. When you check actual operating temp with VCDS, don't be surprised if it is actually LESS than your visual interpretation of the gauge reading. But your check of actual temps may point to a lazy gauge sensor or gauge itself (after removing the smoothing phenomenon from the equation). As for the cause, I think you've already hit on the most likely explanation: a lazy/failing thermostat. This engine also uses a variable output primary water pump, which is theoretically capable of sticking in the "full flow" position and which would slow the speed of coolant warmup, but only at temps lower than full operating, so I think this would be an extremely remote possible cause of your issue. Perhaps if this were combined with a lazy thermostat, it might contribute slightly to the problem.
S

At 101k miles, I installed a new engine with brand new thermostat and there is a very noticeably shortened time for the coolant temp gauge to reach NOT. Oil still takes its sweet time, but I'm thinking my thermostat on the old motor was getting pretty lazy. These are not fun to change btw. Core support in the service position, remove charge pipe, "throttle" valve and its coolant lines, and also the support bolted to it and the block.

Your description of not noticing in previous winters only points more to it slowly dying. You could block the front and live with it for a while longer, or just replace it.
M

Well - still havent been able to diagnose it further, but, yesterday noticed a small puddle on the floor of the garage, and immediately got a "check coolant" warning when starting the car. Sure enough - coolant was low, and there's coolant puddled on top of the plastic belly pan looking down into the engine compartment. Probably need to take it in...wondering if any would be covered by extended TDI warranty?

mvoss15 said:
Well - still havent been able to diagnose it further, but, yesterday noticed a small puddle on the floor of the garage, and immediately got a "check coolant" warning when starting the car. Sure enough - coolant was low, and there's coolant puddled on top of the plastic belly pan looking down into the engine compartment. Probably need to take it in...wondering if any would be covered by extended TDI warranty?
Click to expand...

Unless it's the EGR cooler . Probably not.

why not? the variable water pump SHOULD be covered, in my opinion. thermostat I don't know..
M

Ended up being a leaking water pump - assuming something with the variable water pump was also causing the temperature issues. Forced me into doing the timing belt a little early (at least by miles) but all seems to be back to normal now.