Anyone have an aftermarket roof mounted rack system on their Passat? Please post a pic and which system it is. Thule doesnt make one but Yakima does but I dont knnow if it this Passat or the CC Passat. Thanks.

2015passattdisel said:
Anyone have an aftermarket roof mounted rack system on their Passat? Please post a pic and which system it is. Thule doesnt make one but Yakima does but I dont knnow if it this Passat or the CC Passat. Thanks.
Click to expand...

As guyguy said, thule has a great kit. Fits well on the car.
2

Guy, I know the manuals say no roof racks are supposed to be mounted. Can you post a pic of the whole car then the rack system?

Another Thule user here - you have to measure with a ruler to mount the feet but it works great. I have not taken any pix, sorry. If you sift around a bit on the web you'll find some though.
C

is it better to have Thule? I have a Yakima rack system from my previous car (civic) and would the Thule work better?
P

this may help you guys

I bought a Yakima baseline/JetStream Setup for my Golf about a year ago, and picked up the kit, so that I could fit our Passat at the same time. The Golf uses bc123 up front and bc125in the back. At the time I bought the rack, Yakima stated that bc137 fit the Passat up front and that bc125 fit the back.

Fast forward a year later and I tried fitting the Passat with the rack. Bc137 fit decent up front, but bc125 wasn’t even close in the back. I checked Yakima’s website and noticed that they no longer have a baseline/JetStream setup for the Passat listed any more. I emailed Yakima with some pics of how badly bc125 looked on the back (I didn’t even try to tighten them), and they responded that they had pulled the previous recommendation and were working on a new kit.

The new fit will be bc195 and bc196. I told them that the only reason I had purchased bc137 was for the Passat and the said they would send me the new fit kit free of charge as soon as they are available. This is the second time I’ve contacted Yakima’s customer service, and they’ve been great both times. The JetStream rack has been really solid on the Golf.
Last edited: Aug 19, 2018

Yakima sent me the kit just as they promised, and I installed it on the Passat yesterday. Bc195 and bc196 work just like they should. . I’ll get a few pics uploaded soon.

Looking forward to seeing the pics...

Sorry about the delay.

Thank you for the pics, they look nice. Once they are set, do you just take them off and put them on in the same place, or do they need to be reset each time?

Don't know what anyone else does; I measure each time. Thule did provide a set of clear stickers to protect the paint but I did not use them - this would give an easy indication of the correct spot though!

After initial set up, Just measure 7” off windshield for the front bar and tighten. Center the back bar 32” from the front and tighten. Takes maybe 5 minutes to install and just a couple to remove.

Got a smoking local deal on a Thule system with bike mounts from craigslist. for the 2015 NMS Thule uses the 1775 kit for the rubber coated claws and rubber feet on a 480 traverse foot system with square bar. but feet on mine were not the 480s so I modified them a bit and took about 2 hours getting it centered and lined up, removed, recentered, etc.. Going to get the $160 480 foot kit new online soon to replace the thule ones there now -- they really improved the process with the 480 mount. The Thule aero mount process is even more advanced with settings on their OEM literature (dont want to buy one without it or without being able to download from Thule!). This was square bar -- and about a $400 savings so far - with a 60% ebay residual value for every part being swapped out (foot kit). I wont be using mine at highway speed with bikes on until I get the new 480s-- but hauling a long surfboard or SUP locally to the beach or bikes to the trail is more than fine. the square bar is steel instead of thinner aluminum, carries more weight or has less flex. pics to follow..

Jed - the Yakimas sound way easier to line up than Thule. 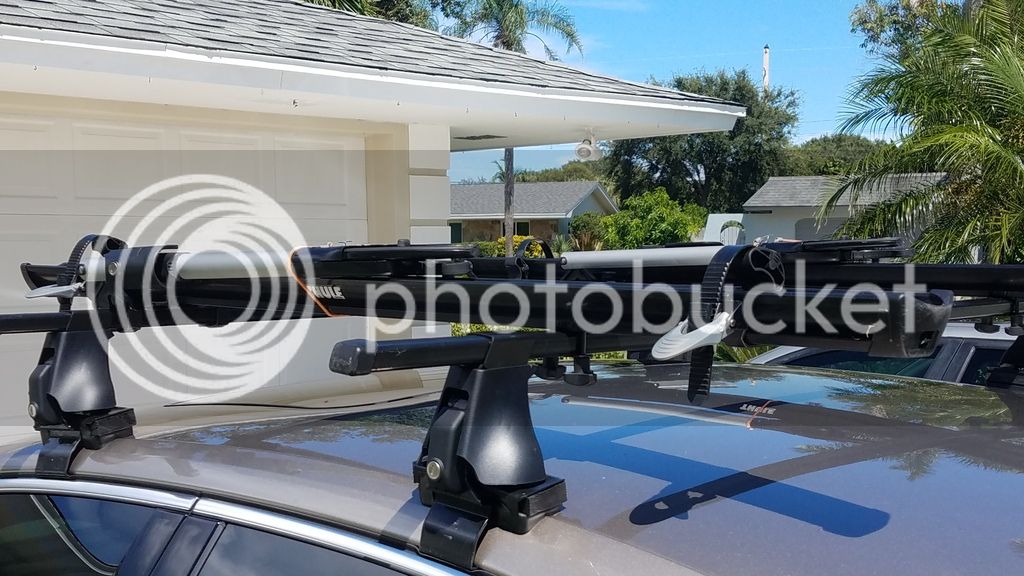 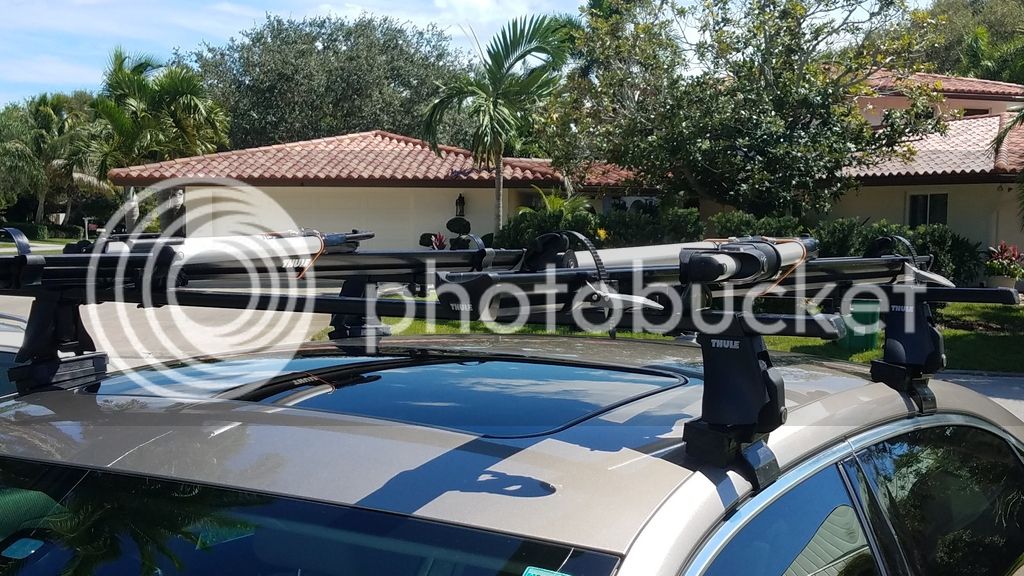 my mod with this was adding rigid spacers -- it allowed the entire system to allign instantly and took a bit of analysis to determine how to adapt these until the 480 Traverse feet arrive. They are a bit more "tower" now than 480s - but you cant rip these lose from the car. Got 10' swell heading here to central FL by Wednesday with the Florence Hurricane on a coastal-scraping track, so the bike carriers are coming off pretty soon and going down to the bars to haul some boards.

One other gimic mod I was thinking about was adding a rigid (maybe 1/4" marine plywood solid like 40x27") sun-blocker to cool off the car during the summer. A buddy once had a non-AC series landrover that had a double roof like that and it was not too bad in mid-day florida summer sun -- it's like the car is in the shade during peak sun. need to analyze this a bit more -- but it's probably worth the effort.

anyone else have an idea how to shade with this ?

jck66 -- yes - I got the clear stickers too, not installed yet. but what ive done so far is align the racks and then add dots with a silver sharpie to speed up install. Takes about 5 minutes now. I will eventually install the clear after Im happy with the location. The 480 footpack seems to have a tension setting tool that my generation didnt have or the seller didnt have anymore. Im guessing the sticker also provides more friction for the rubber to keep it in place ? assuming its not wet or frozen...