Since the Touareg was introduced with the V10 engine I have been fascinated, as at the time I still did not have a TDI but drove a Silverado with a Duramax. It wasn't long though before I did get my first TDI, but still could not imagine ever owning a V10 beast. Fast forward to a few years ago, when we sold our TDIs back to VW, I was looking hard at the T2 Touaregs. Instead of going with one of those, I ended up getting the highest mileage Silverado Duramax I could find, with 409k miles. I sold it this week for more than I paid for it in 2016 at 426k miles. I did it so I could get a TDI Touareg at last. Though I did see a few of those V10's out there, I stuck to looking at the V6 TDIs with the extended emissions warranty.

Yesterday I bought one. A 2011 Touareg, black on black, with Executive package. It looks good for it's age, with 138k on the odometer, but there are a few issues. I will have to get new tires almost immediately, as the right rear is almost bald. The rest I could probably get another 5k miles out of. I've also found out that the sunroof leaks. Thank you VW for yet another leaking roof. I'll see if it is just a blocked drain or if I need to take the headliner down, not looking forward to that.

At any rate, here she is. No name yet, no planned modifications yet, but need to get those tires replaced and see if my shaking above 65 MPH is corrected. 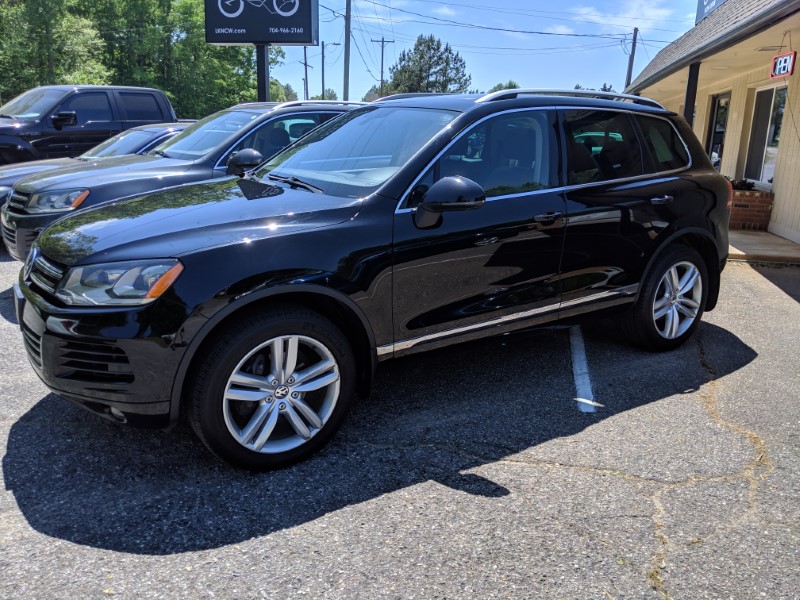 Thanks! I'm hoping to get her cleaned up once I'm done with this trip and get some decent pictures uploaded. I've been working out today what my maintenance plan is from 140k-200k miles.

Sunroofs, could we not?

I don't know if it is more correct to say I dislike greatly sunroofs or VW's sunroofs or VW's idea that every upscale vehicle has to have one. The Touareg of course has one, and one of the drains isn't working like it should, instead letting water into the vehicle down the D pillar. I ran line up the drain today and it didn't seem like there were any obstacles until the top. This looks like a headliner drop to fix the line junction with the drain in the rail. Not my idea of fun. At least I can park with the back end up hill and the front drains work.

Nice! When I was shopping around for one, I found the very best deals on them were BLACK ones. Apparently NOBODY is south FL wants one with our heat!
D

Awesome! Did you get your car shaking at ~60mph issue taken care of?

DieselDeeds said:
Awesome! Did you get your car shaking at ~60mph issue taken care of?

It isn't as bad with the new tires, but not gone completely. Honestly though, if my wife doesn't complain about it it can't be that bad. She has been driving it about 140 mi a day, saving some miles on her car.

I spent about 6 hours today working to fix my sunroof drain issue. The tape around the outside seal was starting to fail, not surprising based on the heat, and it was black tape on black paint.

Here is the headliner down as I took it. The three back ones I left as there was enough room to work, plus it made it easier to get back in place in the right spot. 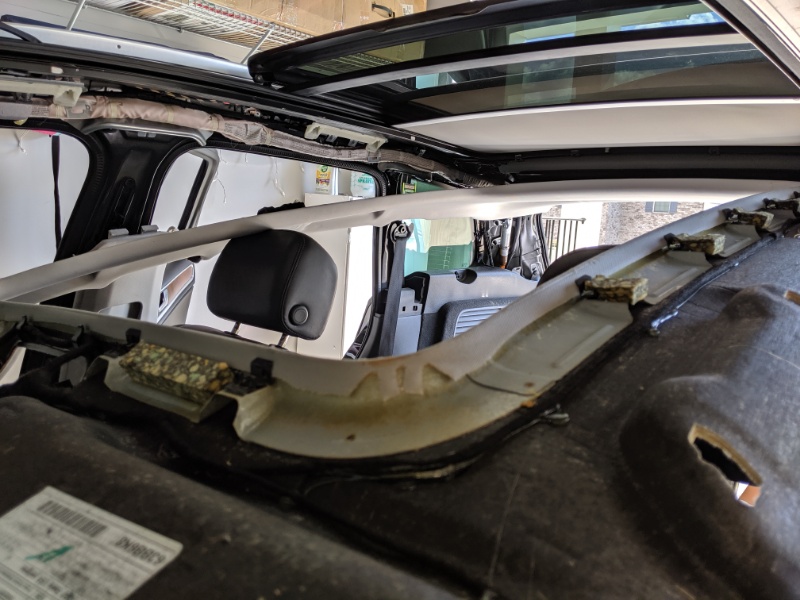 This was the problem, the drain had come off. It is fixed now, held back in place with clear RTV. Tested it, and the other side I gave the same treatment to, everything worked as it should. If I never have to drop the headliner again it will be okay with me. 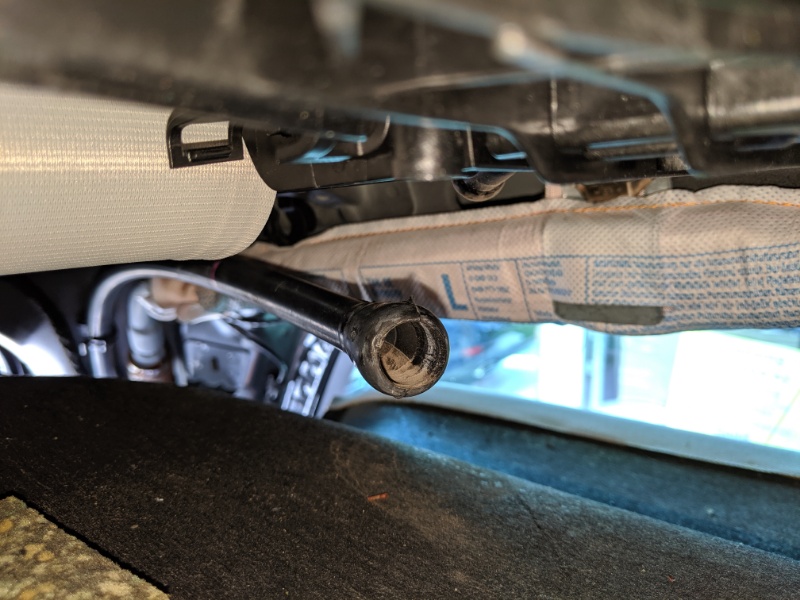 After getting it all back together I only need to order the A pillar fasteners (PN in the service manual!) and the surround for the rearview mirror. I broke it, whoops!

All I can say is that I hope that I never have to attempt this fix! Thanks for sharing the pictures.


Our 2014 Treg Exec TDI is up to about 158k and still going strong. I don't see many Tregs with high mileage around, but this vehicle serves us very well and hope that we can own it for at least another few years and get it over 200k. I have complete service records for it and other than an issue with the infotainment that I haven't figured out yet, it has only needed brakes, tires and fluids. The front rotors are a little bit warped so it will probably be due for its second replacement set of pads and rotors up front sooner rather than later.

KITEWAGON said:
All I can say is that I hope that I never have to attempt this fix! Thanks for sharing the pictures.
Click to expand...

It is something I hope no one ever has to, but of the 13 or so VW's I've owned this is #6 with sunroof drain issues and the second that I've dropped the headliner to fix. Over the past five years I've lived where I've parked on a pretty steep incline, and that has changed my "why do I have water in the car sometimes" to "I hate VW sunroof drains!"

I have been looking at the fixed Tregs, I had got a base Jetta to avoid having a sunroof at the time. Are there any Tregs without a sunroof? Everyone I have seen online has one.

MPLSTDI said:
I have been looking at the fixed Tregs, I had got a base Jetta to avoid having a sunroof at the time. Are there any Tregs without a sunroof? Everyone I have seen online has one.
Click to expand...

Yes, for the 7P platform, the base version in the US does not have the sunroof, which would have been the Sport version in 2011. I would have went for that one just because of no sunroof, but I wanted push button start. Had to go up to Executive trim for that.

After a few weeks in shipment it has arrived in Alaska with me. For a week without it here I drove in a Nissan Rouge AWD and it worked pretty good without winter tires (M&S). Roads are clearing up quite a bit, and I had no issue getting back to where I'm staying at. I'm going to plug it in for an hour or so in the morning before taking off, I don't think it needs it overnight. Depending on how it handles the rest of the season I may decided if to get snow tires next season, with smaller rims or not. 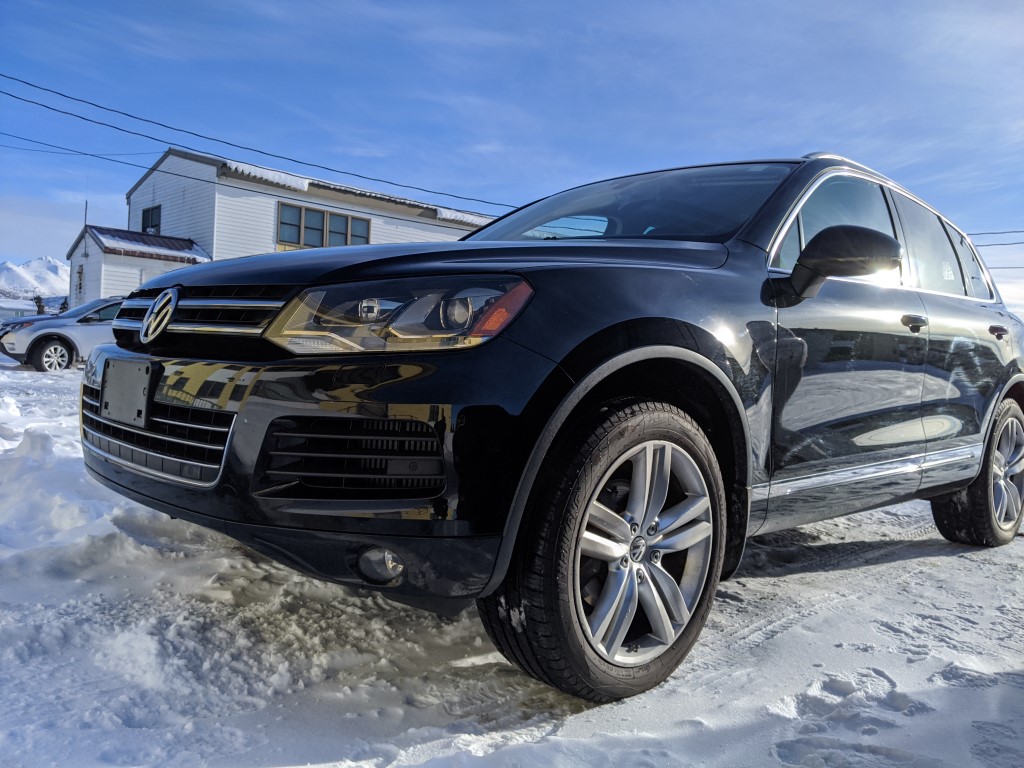