Situation started off with a #1 cylinder misfire...Dealer serviced since new! 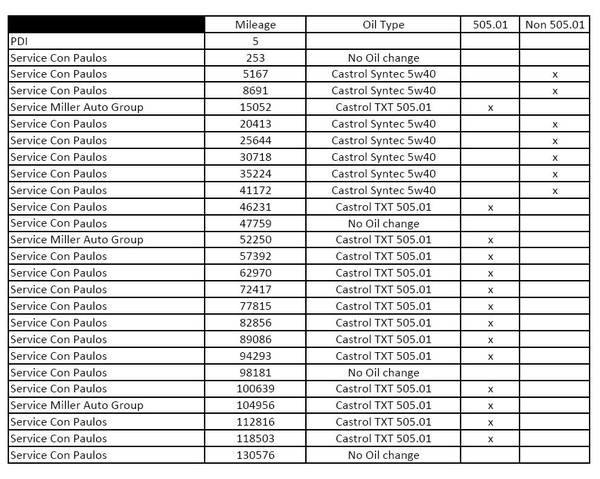 Lets take a look at the lifters to see what we find? 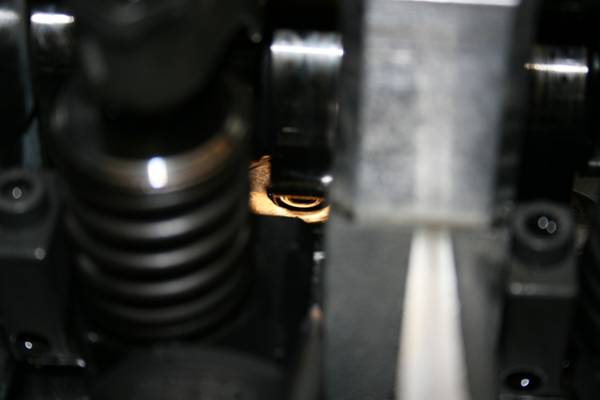 Yup the cam lobes and lifters are worn away! In this case #1 intake valve lifter failed first...

Left to right in order of lifter appearance (8 total): 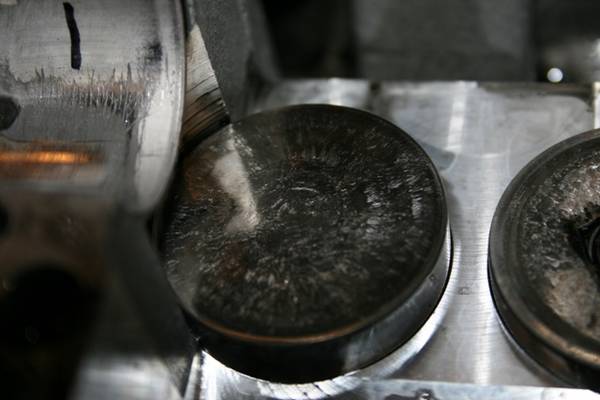 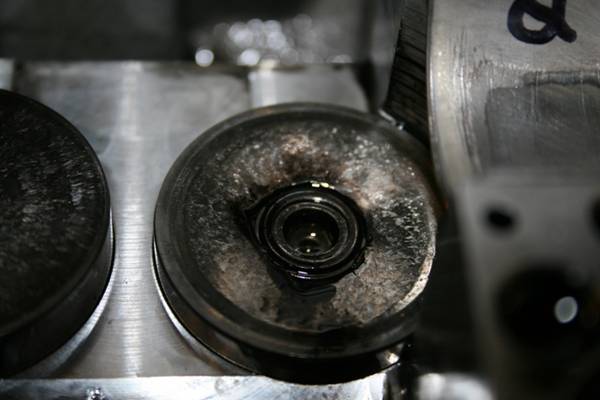 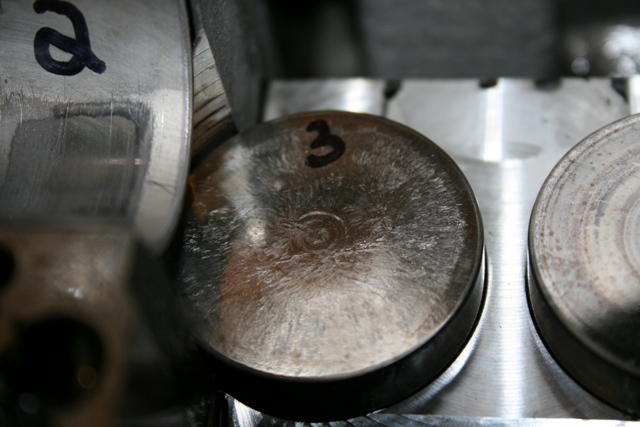 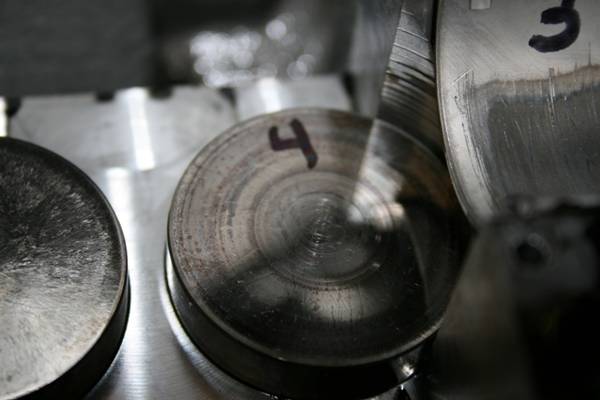 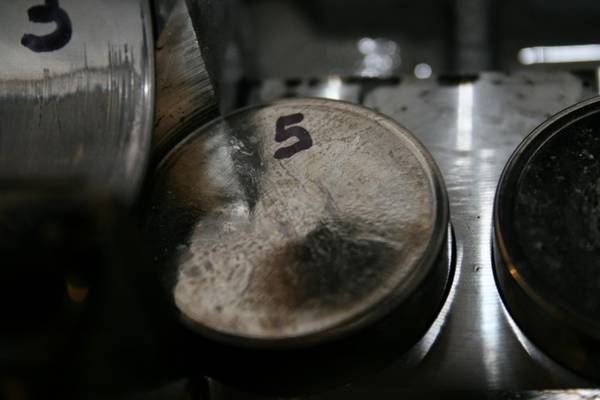 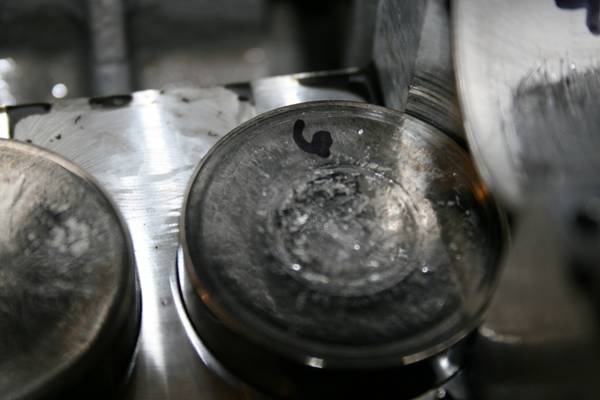 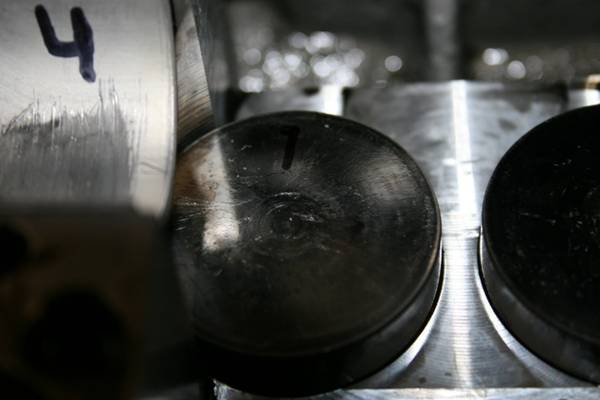 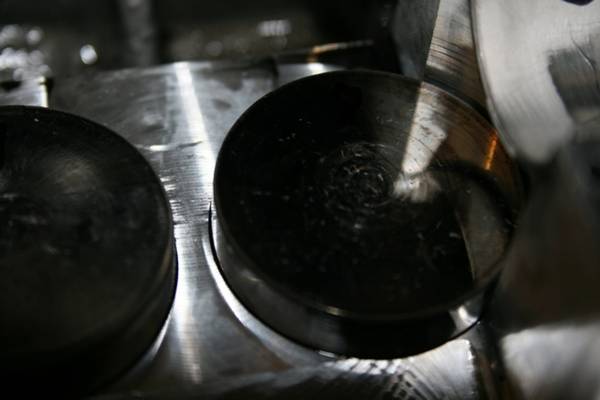 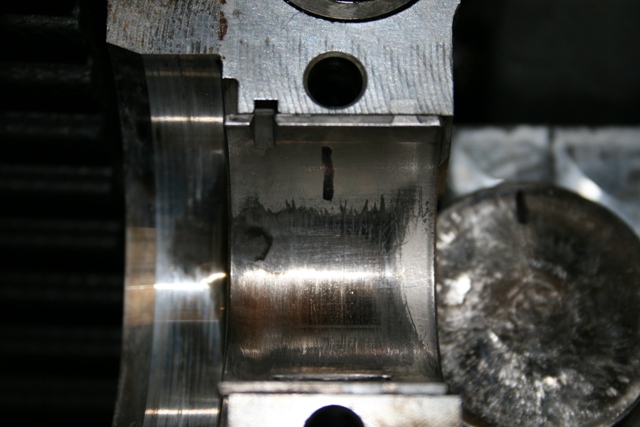 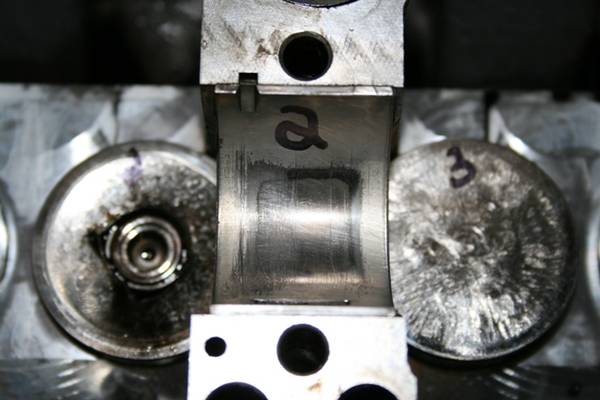 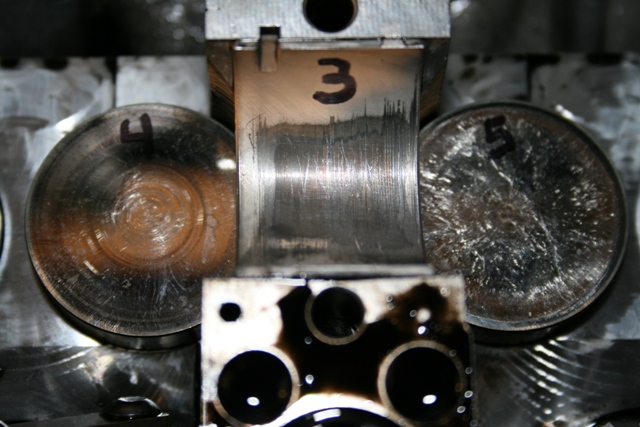 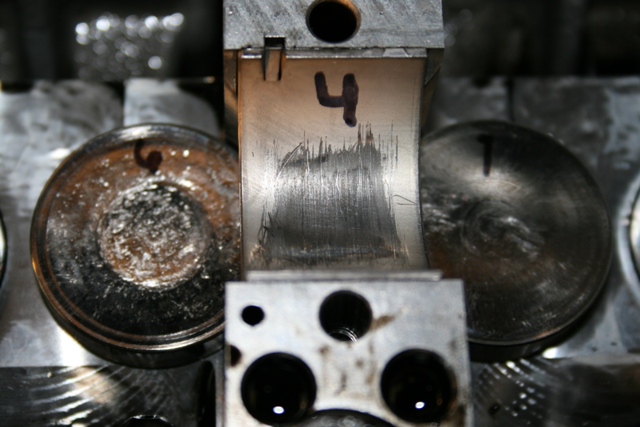 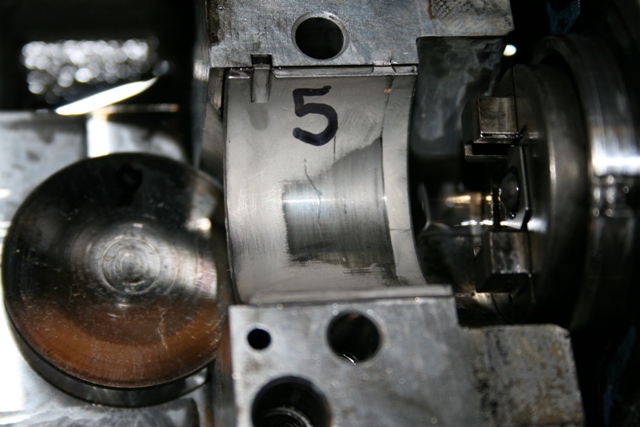 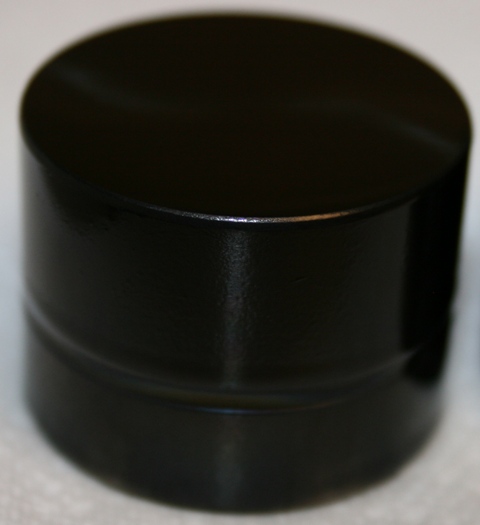 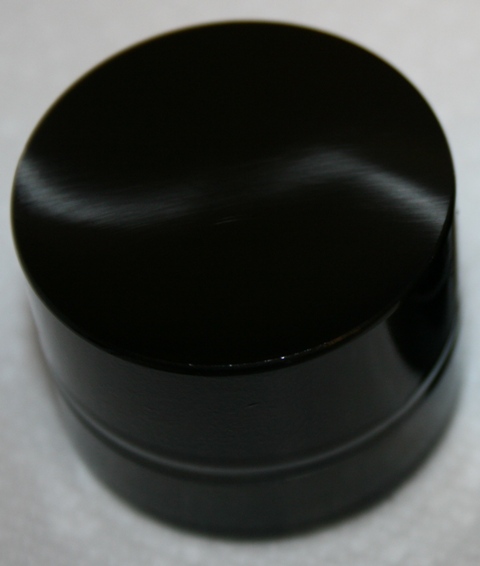 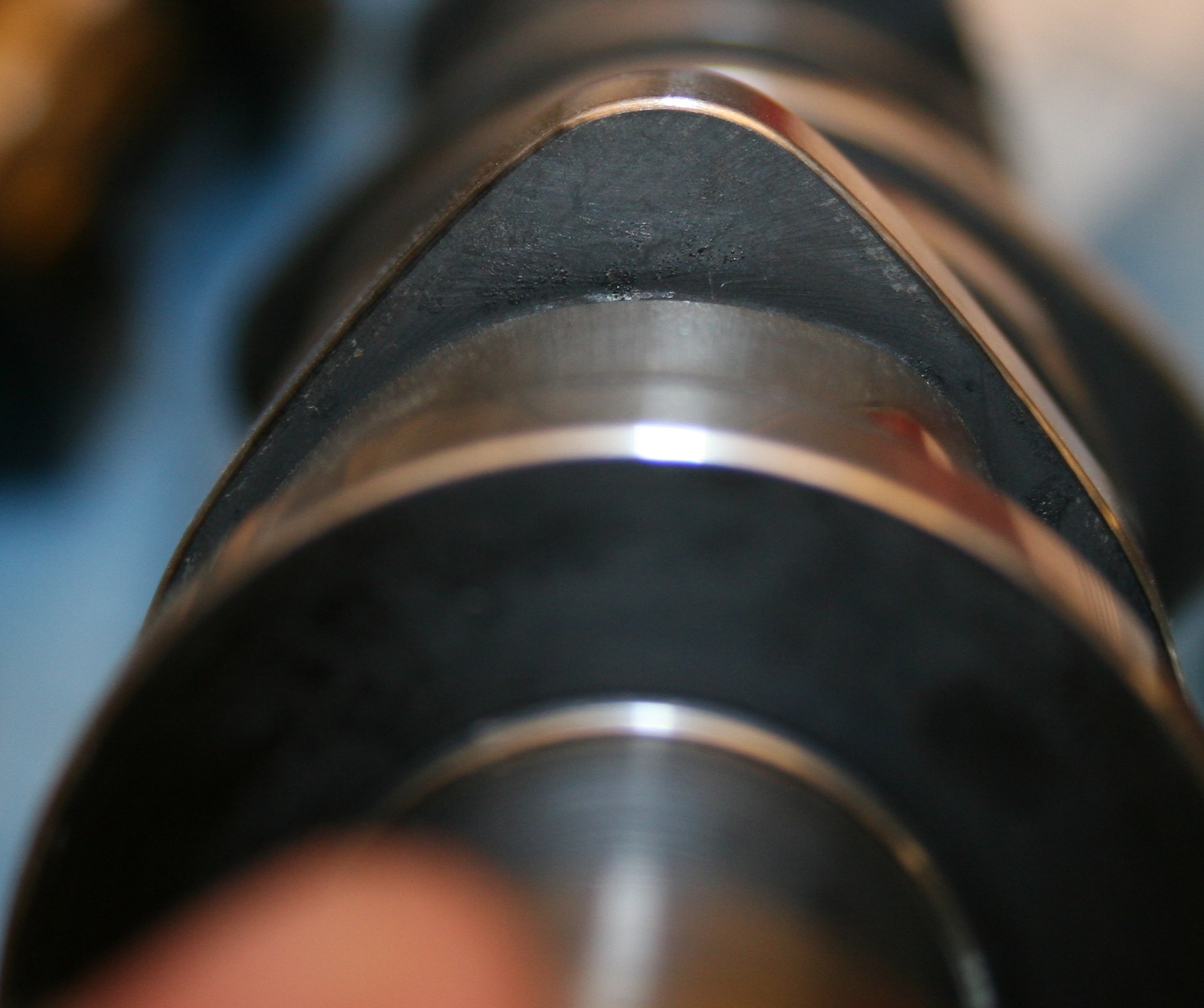 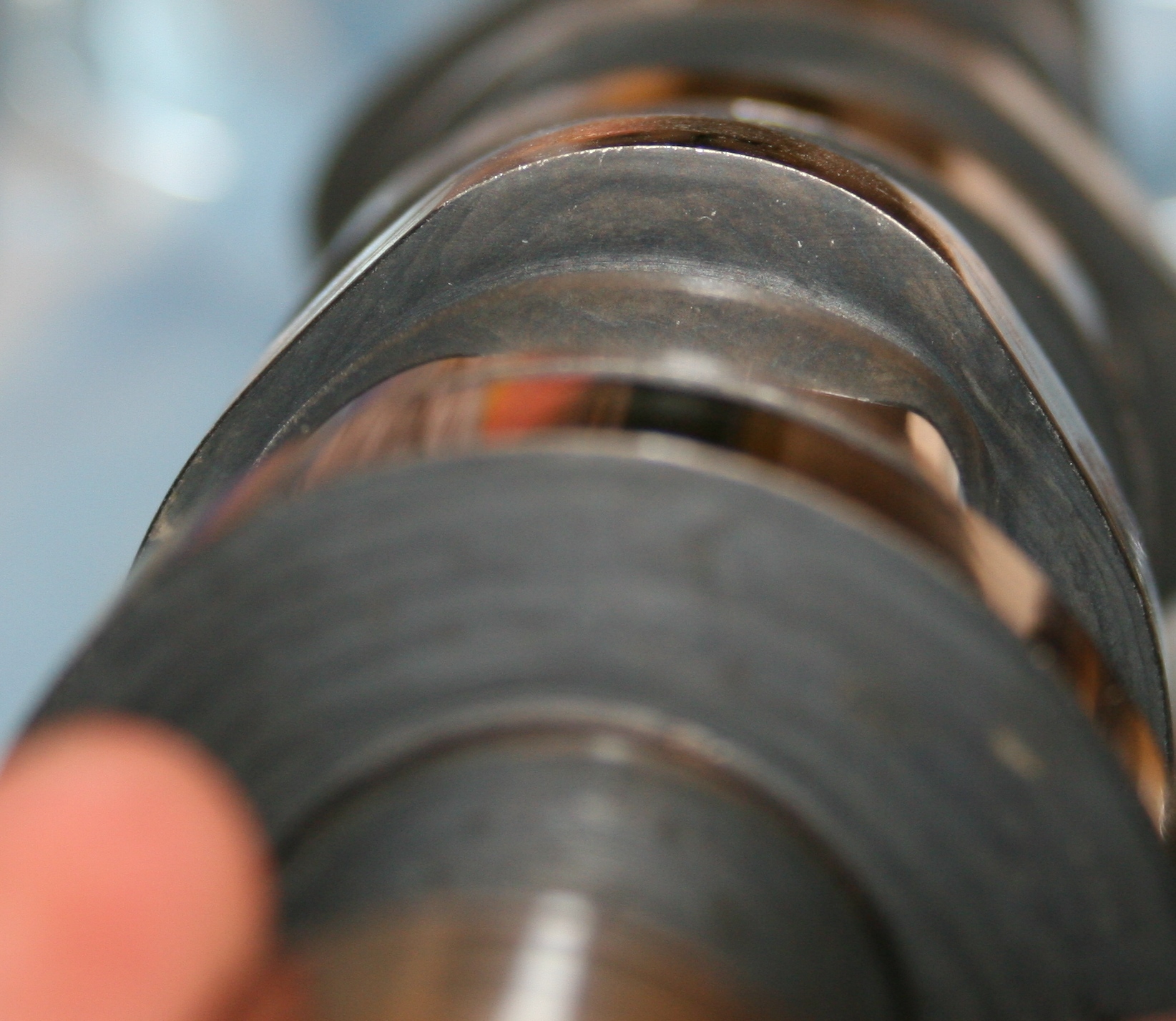 milehighassassin said:
You have a long line of non-505.01 oil changes... could that explain this?
Click to expand...

The use of 505.01 later in life postponed the inevitable.

Does he have any recourse since he can prove the dealer failed him. I would think a judge in small claims would listen.
D

I think yes since the dealer documented their use of the wrong oil.

He will be pursuing the issue so we will see.

iv seen this many moons past
D

Drivbiwire said:
Situation started off with a #1 cylinder misfire...Dealer serviced since new!

Finally some useful information on this topic. Being impartial and making no assumptions, I'd say it looks like the TXT caused the damage. The use of Syntec ended at 46K miles and a switch to TXT was made. The engine was fine for another 90K miles or so when the failure occurred. I'm not saying the TXT definitely caused the damage, but a lot of you are jumping to conclusions and blaming the Syntec just because the TXT is certified and the Syntec is not, but when in fact the TXT is a bigger suspect.
Last edited: Apr 1, 2007
R

Those are some truly scary pictures.

Just a thought: The intake and exhaust lobes look to have the
same lift from your measurements. If this was an oiling problem,
wouldn't you expect to see pretty much the same lobe/lifter wear
on all 8 ? Likewise, I'd think a "soft" cam would wipe all the lobes
in a pretty even manner also. Some of those lobes show pretty minimal
wear.

The engine was fine for another 90K miles or so when the failure occurred
Click to expand...

The engine was far from fine once the wrong oil was used.

The wrong oil used early in the cars life caused damage to the lifter tops.
When the dealer switched over to the correct oil this slowed the failure
process.

This is a predictable aspect in metal fatigue. Damage the metal, however
you can slow time it takes to reach failure but the failure will still occur.

Once the lifters had raised surfaces larger than what the oil additives
could protect against you go from high pressure to shock.
Those larger raised regions in the high pressure
contact areas continued to shock the lifter causing high pressure spikes
that exceed the pressure capability of the approved oil.

That shock that the lifters were exposed to caused an increase in metal
erosion to the lifter. The cam by virtue of having more mass had more metal
to give up where as the thickness of the lifter being much thinner and lower
in mass suffered the worst visibile damage.

Again switching back to the approved oil lessened the damage induced
by the shock transmitted to the lifter thus delaying the point of failure
later into the cars life.

Drivbiwire said:
(snip) That shock that the lifters were exposed to caused an increase in metal
erosion to the lifter. (snip) DB
Click to expand...

__. Yes, but what ate up the cam bearings????? It wouldn't be metal chips (unless there's metal chip damage
throughout the rest of the engine -- and there were certainly *lots* of metal chips flying around from all the
fatigue bits coming off the lifters). The cam bearings should have had a good supply of clean oil under pressure
direct from the oil pump. I can see that the cams are narrower, causing more stress on the lifter/cam interface
points, but I just don't see what should eat up the cam bearings like that.

__. On the other hand, I'm famous for the "if you ever find *any* Castrol oil in my car, you'd better bury me cause
it was put in over my dead body" but I'm wondering if maybe the "super-high tech" Castrol 505.01 ain't so super
high tech after all.

__. If this were my car, I'd have a look at (at least one) main and rod bearings and I'd look at the bores as
best I could when I had the pan off. Somethings *really* wrong here!
D

Should he switch to the correct oil or continue running regular oil? Could the swich to Synthetic cause oil leaks. Or should he switch to a non synthetic rotalla? The car has 170,000 miles. Runs good and has good power.

Fantastic foto documenation, DB. It strikes me how extensive the damage is. It looks like it endured a long, slow death requiring 10's of thousands of miles to reveal itself.
D

How do you know that? It sounds like pure speculation and wishful thinking. You're condemning the Syntec for one and only one reason: it's not certified. If the Syntec was, say Elf 505.01, and the same failure occured, would you still blame the Elf oil, or would you suspect the TXT? You need to remember that VAG guarantees the performance of 505.01 oils only for the duration of the powertrain warranty. 130K miles is far beyond the warranty and with that kind of mileage you're on your own, regardless of the type of oil used.
D

No need to speculate, VW said this would happen and it did!

deshet said:
I have a quick question. A friend just bought a 1999.5 Jetta TDi the lady has been running non sysntheic standard (like jiffy lube) 5-30 pennzoil for the last 100,000 miles. Oil changes every 3000 miles.

Should he switch to the correct oil or continue running regular oil? (snip)
Click to expand...

mrGutWrench said:
...I just don't see what should eat up the cam bearings like that.
Click to expand...

I agree with your comments. Those cam bearings tell an additional story - perhaps simply that the engine was accidentally run without oil. Hydrodynamic lubrication doesn't care about anything other than viscosity.

Almost as bad as my #4 Piston contact with valves. Looks like another "Dealer" has shown his lack of knowledge when it comes to diesel maintenance. Sorry for your problems...it should not have happened.
D

Just from my own experiences, this does not look like the result of running the wrong oil, but rather like running either with NO oil or highly metal contaminated oil. My guess is either an oil galley got plugged up or a bearing failed somewhere and sent metal flakes all over the motor.
D

No sludging, no varnish of any kind, engine looks like any other that has
been run on a good quality synthetic it's entire life.

I will take a closer look at the bearings and see what is embedded in them. The soft lead tin layer will trap small particles. Will report back with my findings.

These shorter OCI's probably didn't do the engine much good either?
It's been discussed many times the need for oil additives to stabilize
over tiime. The first 1K of the new oil produces the most Fe wear,
for example.
JB
D

Drivbiwire said:
No need to speculate, VW said this would happen and it did!

You're still speculating. VW is staffed by mere humans and they are capable of making mistakes. So is Castrol. That's why there are such things as recalls. If you want to follow proper logic and scientific methods, you shouldn't rule out the TXT as the cause of the damage. Anything is possible. It still seems fishy to me that the damage took another 90K miles after the oil switch to show itself if the TXT is really that good at protecting the engine. But maybe neither oil is at fault here as was just mentioned.

Maybe you should take some English class before you say anything else.
D

JB05 said:
These shorter OCI's probably didn't do the engine much good either?
It's been discussed many times the need for oil additives to stabilize
over tiime. The first 1K of the new oil produces the most Fe wear,
for example.
JB
Click to expand...

That fact that it's been discussed doesn't make it true. I'd still like to see some unbiased documention of this. If it's really true that the anti-wear additives need heat to "stabilize" then why don't the oil companies preheat their oils?
You must log in or register to reply here.
Share:
Facebook Twitter Reddit Pinterest Tumblr WhatsApp Email Link
Top