I know I'm a decade late to this party, but good times will be had.


My fun beater decided he wants to go a little faster again and overheated the na AAZ, a quick look around craigslist revealed a dirt cheap decent running 96 Passat with the 1Z and CTN tranny. 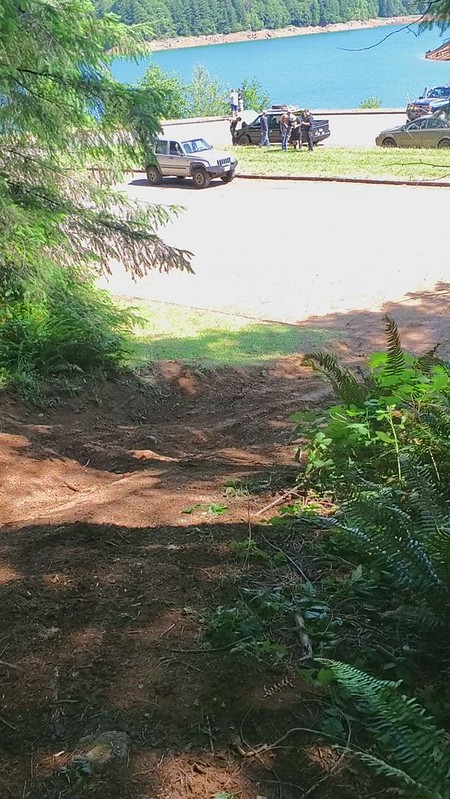 20190629_112620 by Brice Moss, on Flickr
After a lotta reading starting with the wonderful swap list sticky above, I decided the route to go was to take everything from the B4 I could possibly make fit into the Mk2 and I've gota sawzall, welder, and not worries about looks 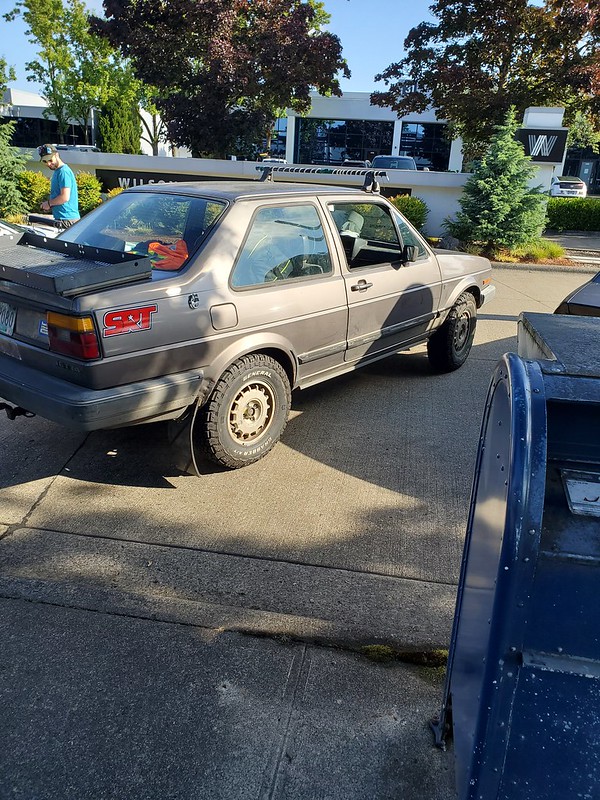 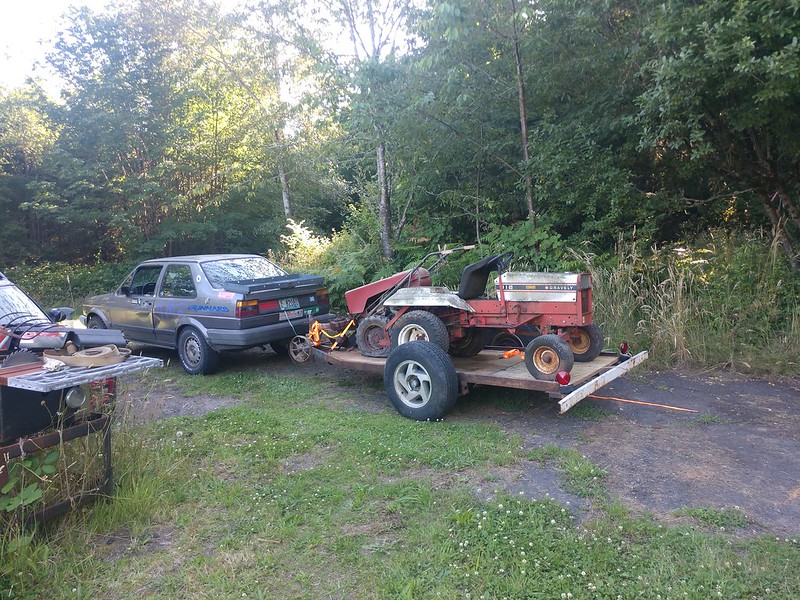 I have extracted the whole wiring haness from engine bay to fusebox, fusebox to dash, and down the drivers side to the b pillar. I've got the pedal cluster and master cylinders already swapped over, a plan for cutting the dash to fit the b4 gauge cluster.

I'm highly concerned about the gearing on the CTN tranny (is it really a 3.2 final drive?) cause I'm pushing 28" tires and offroad this thing a lot more than I drive it on the freeway and I want a limited slip of some kind.

so questions:
Wavetrack or Peloquin diff with the shim kit? I'm leaning towards the Peloquin mostly because that dude called me up and chatted with me a half hour when I left a message on the website to figure out which level of his shim kit I wanted to install in the 020.

what maintenance to do on the TDI while I've got it out of the car? I plan to do timing belt, water pump, valve cover gasket, and a clutch disk, anything else?


The turbo spins nice but there was a drizzle of oil in the inter cooler rebuild or replace and if replace with what? Low end torque is the highest priority on this rig.


Sorry for the wall of text I'll revise when I get some pictures loaded.

Grab a mk4 TDI transmission or maybe even a 20v mk4 Jetta transmission with a 3.6 Ring and pinion then install the .756 TDI 5th gear. That should work well with your tires.

I thought about grabbing another box, but I want to do a torque biasing diff anyway, so I'm going to go ahead and install a 4.24 ring and pinion at the same time. I've got a mini for long freeway trips so donna care if I'm rev limited but need the grunt down low. If my gear calculator is right I'll still hit 75mph before 3krpm in 5'th.
I know I'll lose some economy but this thing spends more time on quad and 4x4 trails than freeways, so I'm happy to compromise a bit on the top for better low gears.

Think I found the R&P I need, Can someone confirm this will fit?

what else is should I do while I have the tranny split? this box was shifting well in the parts car and oil looks clean.

G60ING said:
It will fit bit just go find a b4 or mk4 2L transmission and it will be installed for that price
Click to expand...

Thankyou. I'd end up pulling the 2l tranny apart anyway because that 3.3 first gear is a non starter for this projects goals so I can pay the premium and avoid the hassle.
P

So current state of affairs is much like this though I have drilled the needed holes and mounted the clutch and brake master cylinders from the Passat to the firewall. 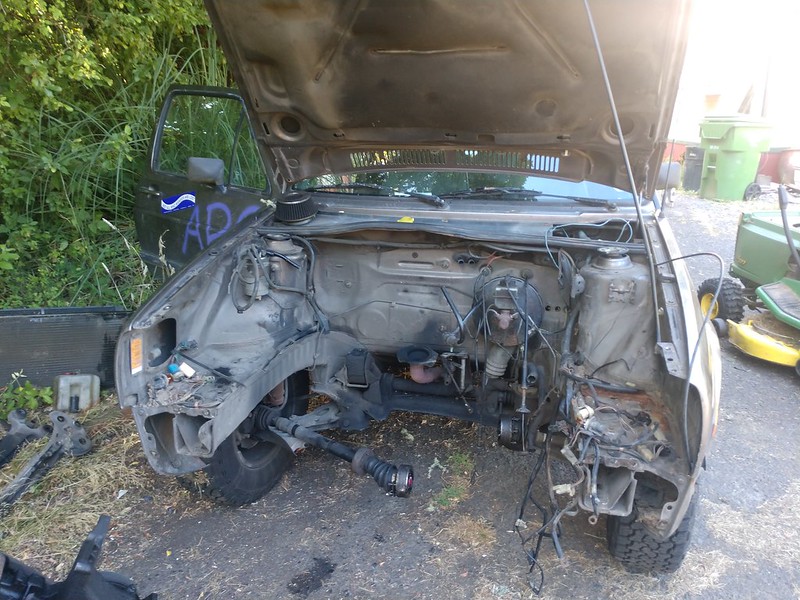 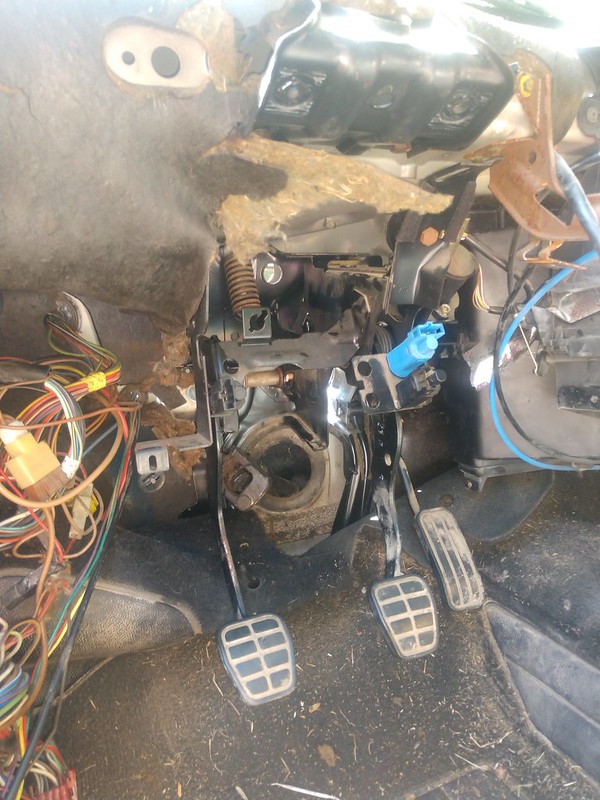 
Things'll be slow for a couple weeks as I'm working a lot of shifts right now but I have some waiting on parts to do anyway. next couple steps are to transfer the steering rack and PS lines as the one in the Jetta is getting pretty loose at 450k miles, build brackets to hold the Passat cluster in the Jetta dash and get the wiring harness laid out and connected inside; trying to label some of the extra circuits I may have use for later.

Pics look good to me. Sometimes being a decade late to a party is the best way to do it. Let everyone else try, fail, and adjust, then you get to do it the best way on the first try!
P

Life, overtime, waiting on parts, and now the air quality because the whole coast is on fire have had me in a holding pattern for a pit, but I've got a box of parts from Cascade German for the motor seals timing belt kit, and upgrade to single mass flywheel. the 4.24 ring gear is harvested off a diff bought on ebay and checked for wear, and the Peloquin diff is on order, hope the fires and all don't delay that past the 2-3 weeks I'm expecting. I'm working in starts and fits an hour at a time on the wiring harness, so nothing exiting for pics, but I should have it all sorted and ready by time I get the diff.

I'm looking for somewhere not to awkward to stuff the inter cooler, can't go under the bumper cause I hit rocks on the trail, I'm kinda temped to put it right up by the head and cut in an ugly hood scoop but don't want to lose the sightline. I'm torn between buying a intercooler to tuck in front of the radiator or mounting the stock one from the passat opposite the battery (where the air filter won't be) with a dedicated fan
You must log in or register to reply here.
Share:
Facebook Twitter Reddit Pinterest Tumblr WhatsApp Email Link
Top