TDI
none for now

Dusty, do you have any tips for doing a quick swap in for the engine? I'm trying to do a swap where I can have it in relatively quickly. It seems that having the engine running outside of the car really help
D

My problem now is my alh in my toyota. It has just recently started running rough at idle when I'm on diesel. In the mornings it it so bad I have to rev it to almost 2 rims to keep running. Sometimes it cons out at stop signs. Once I start driving down the road it runs great, plenty of power until I have to stop again.

What is weird about this is that it runs great when I switch to veggie. It idles smooth. If I switch back to diesel it goes right back to not being able to idle. The idle jumps from like 500 to 950 rpms.*

Any help would be greatly appreciated
M

Normal idle should be 903 rpms for a stock engine, I think.

Any errors in VCDS?


Guess: Something internal in the pump where a thicker fuel is allowing pressure to be made but the thinner diesel does not?

P.S. It seems that conventional wisdom here is that WVO will break your engine. However, I met a guy who claims 50K miles with no issues....
D

I think he needs to adjust the IQ - "hammer mod", and asked him to check his IQ - Injection Quantity.

markd89 said:
Guess: Something internal in the pump where a thicker fuel is allowing pressure to be made but the thinner diesel does not
Click to expand...

Has anybody thought about or actually installed exhaust stacks on there truck?

I didn't say I was going to do it. Just wondering because I can through a lot of black smoke and I thought it might look cool coming from two stacks.
D

Ok my truck does not want to start. When I try to crank it on diesel it will crank probably 30 seconds before starting. Sometimes it won't ever start. If I switch over to me veggie system I am able to increase my veggie fuel pump to about 40 psi. If I do this I only have to crank on the truck for 5 to 10 seconds and then it starts. I can spray WD40 in intake and it will fire right up.

Once the truck is running it runs great. I have just cleaned my QA and finally got it adjusted back to where I like. Could this be stuck vanes in the injection pump or does anybody else have any ideas? I was thinking about running a couple of cans of diesel purge through it today.
D

Not sure what happened to injection pump but I replace it with a used one I bought and truck runs perfect now.

My Toyota diesel truck had a little stack. Can't hardly make it out in this pic, though. 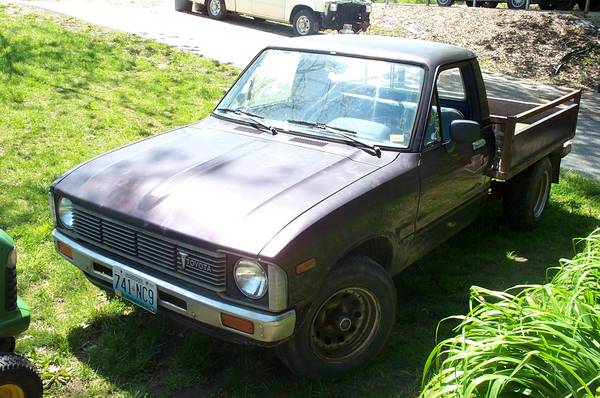 Well I've had another set back with my turbo. I just heard back from the shop that I have some kind of contaminants in my oil. There are grooves big enough for a fingernail to get caught on the turbo bearings. Oil contaminants is not covered under warranty. My turbo guy is recommending a pre-oil filter without a bypass before I install the newly rebuilt turbo.

Has anybody else had any issues with oil contaminates or ways to prevent something like this happening again. This turbo is beginning to be a big money pit.

dustystdi said:
Well I've had another set back with my turbo. I just heard back from the shop that I have some kind of contaminants in my oil. There are grooves big enough for a fingernail to get caught on the turbo bearings. Oil contaminants is not covered under warranty. My turbo guy is recommending a pre-oil filter without a bypass before I install the newly rebuilt turbo.

Has anybody else had any issues with oil contaminates or ways to prevent something like this happening again. This turbo is beginning to be a big money pit.
Click to expand...

dustystdi said:
I didn't say I was going to do it. Just wondering because I can through a lot of black smoke and I thought it might look cool coming from two stacks.
Click to expand...

To think I used to have respect for this build >.<
D

Have you gotten the turbo issue resolved?
P

What kind of mileage numbers were you seeing, with what tire size, and at what speeds? I'm beginning my ALH swap, after recently selling off my OM617 and related parts. I was seeing 18mpg in town and 23mpg highway with 37's and 4.88's. I'm selling the OM617 swap kits now. Hoping to do the same with the ALH motors. Very anxious to hear your numbers; that's about all I care about.

I would recommend ditching your WVO, or make bio-diesel with it. You need to dry off all water and heat the WVO before injecting it. Bio-diesel is a lot more forgiving. Switch to synthetic motor oil, which should help break down the coking from the WVO.

Edit: Here's a pic of my "CAT" stack I built out of 5" pipe. Powder coated flat black. 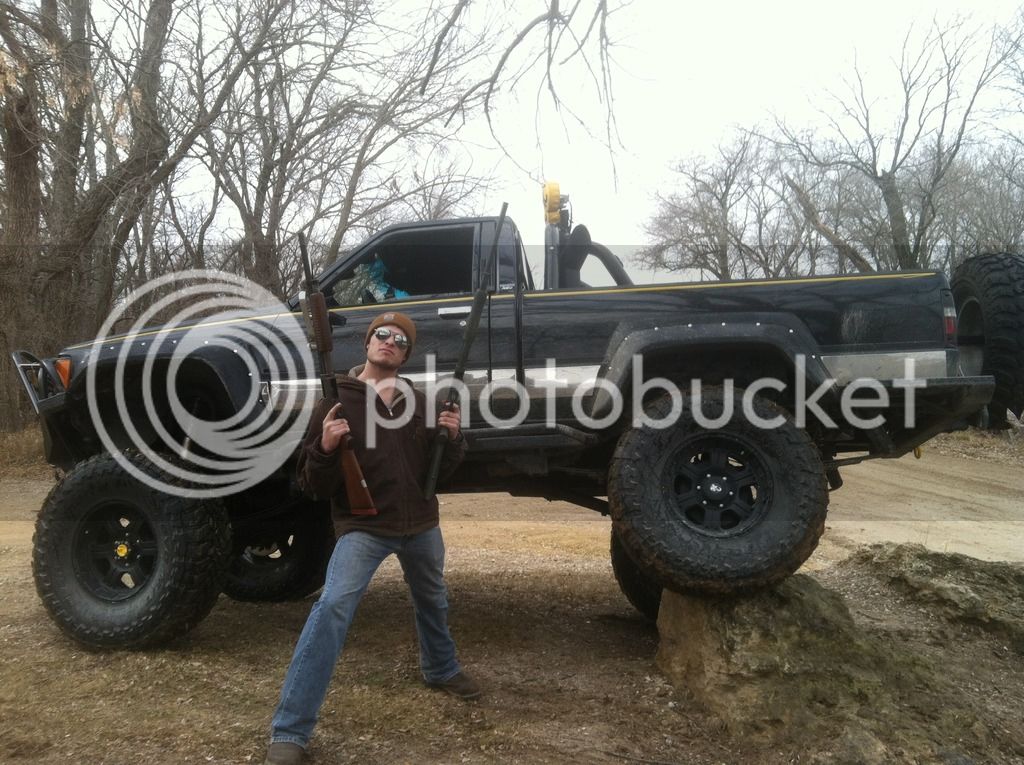 Well it's been a while since I've been on the site. Update on the toyota is that there is nothing really to update. They rebuilt the turbo and I pampered the truck for maybe 10,000 miles and it was running great. Then all of a sudden one day on way home turbo started squealing again. I stopped driving it immediately so maybe I could just do a simple rebuild myself on the turbo. I'm tired of paying minimum of $400 everytime this happens to the turbo. I don't know if I can blame it on the wvo. Me and my family have 5 different vehicles that run off of wvo (2001 tdi jetta stock, 1985 330 mercedes, 1998 mercedes 300d, and my everyday vehicle 2003 7.3 f250). All of our vehicles have turbos and they have all been running on wvo ranging from 3 to 9 years. Never had any problems with turbos or really any major mechanical failures due to contaminated oil.
If it is from running wvo I don't see why any of the other vehicles haven't had any problems. My f250 is still on original turbo and I just rolled over 300k miles. The last 210k was running on straight wvo.

Anyways back to the toyota. I had a neighbor ask if I wanted to sell it today and it made me want to fix it. Do yall have any suggestions about the turbo situation? I was peaking over 20 psi with it? Do yall think it might be an over rev issue, should I consider a bigger turbo, or do yall still think it is all wvo related and I will never be able to keep a turbo from tearing up. I will say with the stock 2001 tdi we have running on wvo it has never had a turbo problem and it runs on the same wvo the toyota does.
D

Increase the operation set points on the turbo actuator, about 5-7" vacuum for start of movement, and about 20-22" to hit the stop. This will reduce overpressure spikes.

If you are rebuilding them yourself, are you having to reset the stop screw as well? Making the stop screw stop lever travel earlier will lower spikes as well.

I would think that coking of the oil feed line could easily be an issue with running WVO. The WVO contaminates the oil. So have you been replacing the oil line? You might consider replacing it, then wrapping it with exhaust insulation to minimize the heat transfer from nearby hot components.

I am sure you know to change your oil more frequently when running WVO. Are you using oil analysis?

Finally, are you pretty sure you are getting good turbo components. Not getting them from prothe, or Rothenbacher or any of his many affiliates and outlets are you?
D

Well I haven't had a chance to rebuild the turbo yet. I have been getting it rebuilt by a licensed born warner rebuilder. Not sure what parts he is using to rebuild or what he is setting the actuator to. I was thinking about trying to rebuild it myself this time because I figured I didn't have much to loose since it only last about 5 to 6 months either way.

You did remind me that I ordered an oil analysis kit off of amazon and mailed it off about 5 months ago. I completely forgot about this but I never heard any results. How do I find out the results.

And no I have not been replacing through oil feed line. I have the stainless braided supply line and I always figured it was fine. Should I be replacing it?
D

Check that it is not getting restricted with coked (burnt) oil. This can greatly reduce flow. If it passes full flow, then it should be ok. But with WVO contaminated oil especially, you can get a plastic like substance plated out in it that chokes flow. It can vary from cured RTV to bakelite in consistency.
D

This is my oil analysis results. This is what my oil looked like right the same day that my turbo started squeling. I dont see anything unusual, and it passed the test.

I should also tell you that this oil had about 5000 miles on it at the time. Do yall see a problem with the oil analysis results or does it seem more like maybe and over revving issue with this turbo? Maybe after I rebuild it myself it will last. 3rd times a charm, hopefully.
D

You might ask on the oil thread. Bob Fout and company. I know too little about WVO use, and except for maybe the viscosity, I am not sure what may be key items to watch for in the oil analysis.
D

I need another turbo. My s7 is done. I don't want to rebuild it again. I've got around $2500 in this turbo trying to keep it going. I would like something else. It would be nice to have a little bigger so that maybe it would last longer but I would also consider going back to stock turbo just to get it on the road again. Does anybody have anything?
D

Well i am getting rid of the stage 3 tune on my ECM so that the stock turbo i have on the truck right now will not be pushed to hard. It should be much more reliable.